With the looming introduction of EEXI and CII rules from 2023 as well as Scope 3 emissions reporting, shipowners are taking a close interest in the economics of engine conversions. 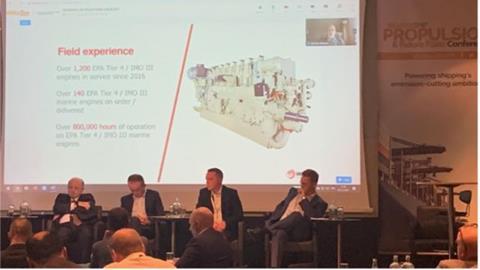 MAN Energy Solutions has been focusing a significant amount of attention on the development of conversion solutions, leveraging its experience pioneering the conversion of low-speed, two-stroke engines to operate on a range of different alternative fuels.

Klaus Dahmcke Rasmussen, Head of Projects and PVU Sales at MAN PrimeServ explained to The Motorshipthat the focus of discussions around conversion projects was increasingly shifting away from discussions around technical feasibility, which had been demonstrated, and moving towards detailed considerations of economic and environmental businesses cases on a ship-level basis.

This represented a change from the earliest conversions, which had been completed on a trial basis, such as the conversion of the Wes Amelie to operate on LNG in 2017.

Commercial enquiries around the possibility of converting a number of vessels to operate on LPG were continuing to arrive, and MAN hoped to be in the position to announce a number of further projects in spring 2022, Rasmussen said.

When asked by The Motorship why the majority of owners of the remaining 147 very large gas carriers were continuing to take a wait and see approach, Rasmussen responded that there was a perception that conversion costs would be too high.

Rasmussen noted that careful analysis of the cost of converting an existing VLGC to operate on LPG fuel revealed that the cost of conversion was essentially comparable with the price differential between ordering an LPG-burning newbuild compared with a diesel-fuelled VLGC.

Rasmussen noted that the estimates were based on the cost of the latest BW LPG conversions, adding that newbuilding costs might vary depending upon whether an order was placed with a Korean or Chinese yard. Similarly, the cost of the fuel supply system could be rationalised if a direct connection with the cargo tanks were specified, potentially eliminating the need for Type C deck mounted fuel tanks.

The scope for further reductions in the costs of engine retrofits was limited, as MAN PrimeServ was already able to leverage its purchasing power to supply parts competitively.

The MAN ME-LPIG engines offer around an 8% reduction in fuel consumption compared with conventional diesel-fuelled engines, while opex costs are reduced, as steam boiler and purifier requirements are lowered.

One additional operational advantage was an increase in vessel availability. Restrictions on SIMOPS for VLGCs mean that eliminating the regular monthly bunkering halt could increase operating up time by up to 180 hours a year.

While fuel differentials between LPG and HSFO have reversed in recent months, this reflects the current volatility in energy markets, The Motorship notes. Based on average price differentials between oil and gas prices seen over the past five years, operators of VLGCs would expect to see operational savings of several thousand US dollars per day. “Unfortunately, markets are not like engines. Past performance isn’t always a good guide to future behaviour,” Rasmussen noted drily.

Looking ahead, there is greater certainty about upcoming CO2 emission reduction requirements. By switching to ME-LPIG engines, BW LPG has stated that it expects to lower CO2 emissions by around 3,000 tonnes per year. The fuel offers wider environmental benefits, with sulphur emissions lowered by between 90% and 100%, and NOx emissions reduced by 10-15%, and CO2 between 13 and 18%. Particulate Matter (PM) emissions were reduced by 90%.

After discussing the economic and operational advantages for shipowners looking at converting their VLGCs to operate on LPG, Rasmussen began to look at the environmental aspects of ship retrofits.

One particular area of interest was how extending the operational life of a vessel would reduce the overall impact of the greenhouse gas emissions generated during the ship’s construction across its life span.

“Just as keeping your car for a year or two longer reduces the overall environmental impact [because the car assembly step is the most carbon-intensive stage of a car’s operational life], we think that extending the operational life of vessels is also an environmentally friendly thing to do.”

Rasmussen noted that converting a VLGC to operate on LPG fuel was significantly ‘greener’ than ordering a newbuilding, purely from the perspective of the emissions produced during the conversion.

“The emissions produced during a conversion are around 2,000 tonnes of CO2 equivalent, or 3% of those required for a newbuilding,” Rasmussen said, noting that this covered both the steel production step, as well as the painting, welding and yard power supply steps.

In 2020, BW LPG commissioned the conversion of its very large gas carrier BW Gemini to operate on a two-stroke LPG dual-fuel engine.

The conversion of the main engine of the BW Gemini to a MAN B&W 6G60ME-LGIP dual-fuel type, capable of operating on fuel oil and LPG, from its original MAN B&W 6G60ME-C9.2 configuration in 2020 had been an important project for a number of reasons.

The project, which had been carried out with fuel gas supply system partner Wartsila Gas Supply and Chinese yard Yiu Lian, had demonstrated the importance of dedicating experienced project management and skilled engineering teams to the project.

“Treating conversion projects as a simple retrofit runs the risk of overruns,” Rasmussen noted, adding that Yiu Lian had demonstrated a high level of professionalism and competence throughout the series of BW LPG conversion.

While such discussions about the lifecycle emissions generated from a dual-fuel retrofit are currently of most interest to company sustainability managers, the precise methodology for life cycle assessments is currently being discussed at the IMO. Such issues may become relevant for shipowners and their finance providers in the future, The Motorship notes.

The current focus of many shipowners and financiers is about the impact of IMO EEXI and Carbon Intensity Indicator (CII) rules on assets, once they enter effect in 2023.

Rasmussen notes that for a 84,000cbm VLGC, a conversion to operate on ME-LGIP would offer a 14% improvement in EEXI score. This would improve the vessel’s performance, so that it was comparable with an EEDI Phase 3 compliant newbuilding.

A similar improvement was seen in the CII performance, with Rasmussen estimating that the CII rating for a 84,000cbm VLGC would be improved by a 16%.