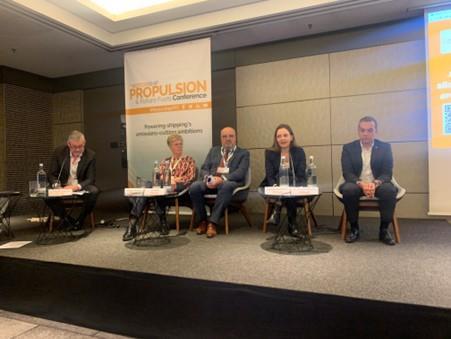 The delay to the first engine tests was not expected to delay the first delivery of the AEngine, MAN ES confirmed. The first dual-fuel engine capable of operating on ammonia is still expected to be delivered to Mitsui for the engine’s first installation before the end of 2024.

The AEngine design will not be made available to licensees to order and produce from until the first vessel to be equipped with an AEngine reports a positive seagoing experience.

Mogensen, a representative from the 2-Stroke promotions team, confirmed that work on some of the other work streams was likely to continue in parallel while the AEngine project team waited for full-scale tests to begin on the test engine at MAN 2-stroke’s Research Centre Copenhagen.

The company had successfully made progress on a number of the discrete work streams associated with the project. The company had successfully identified a number of candidate materials for the AEngine’s components, including a common austenitic stainless steel grade (316L) for the fuel supply system, as well as suitable materials for the O-rings and accumulators.

Progress on a number of other work streams is likely to be impacted by the delay to the beginning of full-scale tests. In particular, The Motorship notes that MAN ES will be unable to move ahead with work to optimise the combustion process and announce the engine’s emissions profile and aftertreatment concepts until the full-scale engine tests begin.