Revised submissions to IMO GHG WG 13 are beginning to cluster around a combination of a Global Fuel Standard and a Fund and Reward (or Feebate) type approach, Chris Waddington, Technical Director at the ICS, tells the Propulsion and Future Fuels conference. 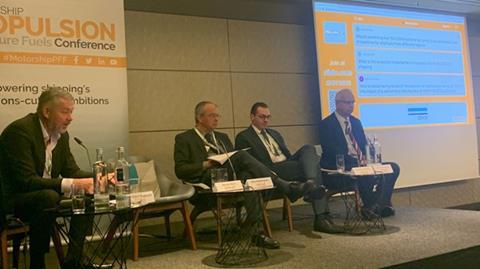 During a presentation focused on the development of IMO’s Market Based Measure, Chris Waddington explained the current status of a task to develop medium and long-term measures, which are intended to narrow the price gap between alternative and conventional fuels.

The four main types of schemes to be proposed.

These include a direct levy, or flat rate contribution per tonne of fuel. Originally proposed by the Solomon Islands and Marshall Islands, the scheme could simply draw on data from the IMO’s DCS system.

The second variant is a cap and trade scheme, which places a maximum cap on greenhouse gas emissions, which is progressively reduced, while participants report their CO2 emissions to the authorities and hand in enough allowances to go with their emissions.

A third type of scheme is the Fund and Reward (or Feebate) approach. This approach sees early movers rewarded financially for their investments, while less efficient vessels pay a penalty.

A final type of scheme is the Global Fuel Standard, based on the GFS proposed by EU member countries, which provides a financial incentive mechanism for the uptake of zero emission fuels.

Waddington noted that an intersessional working group (ISWG GHG 13) will assess submissions in December 2022, shortly before MEPC 79 meets on 5-9 December. The selection of the final scheme will take place in June 2023

Comparing the evolution of submissions between ISWG GHG 12 and ISWG GHG 12, Waddington noted that there had been a clear movement towards a fund and reward scheme, often in combination with a separate Global Fuel Standard.