The second day of The Motorship Propulsion and Future Fuels Conference 2022 turned the focus towards individual fuel types, with dedicated sessions looking at the decarbonisation and strategies to meet regulatory targets. 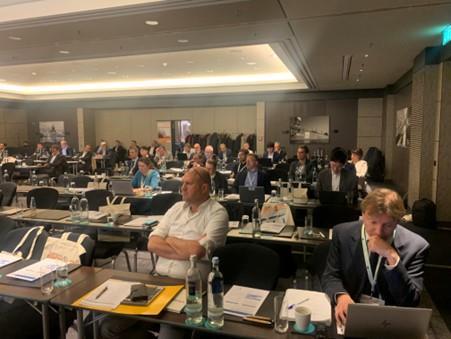 The opening session of the day returned to the topics of regulatory developments relating to carbon pricing with Chris Waddington, Technical Director, ICS and Sebastian Ebbing, Technical Advisor at German Shipowners’ Association (VDR) discussing the development of proposals at the IMO for market based measures (or economic instruments) and the evolution of EU proposals to introduce the extension of the EU Emissions Trading System. A stimulating panel discussion saw questions raised about the timing of the introduction of the ETS with member state ratification likely to delay its introduction until 2024. Similar unanswered questions surrounded the status of potential alignment between the EU’s ETS and potential IMO economic instrument schemes, as well as the fate of EU proposals to apply the ETS to goods transhipped via ports less than 300 nautical miles outside the EU to prevent potential trade diversion.

The opening session was followed by dedicated sessions looking at individual fuels. The biofuels session attracted significant interest, with Daniel Chatterjee of Rolls-Royce Power Systems explaining that expansions in upstream production capacity mean that ammonia followed by methanol were likely to remain the most competitive liquid e-fuels for marine applications over time. Franciska Kjellström of Alfa Laval provided a detailed overview of fuel separation, flow control, fuel change-over, filtration and connectivity issues relating to biofuels. Monique Vermeire of Chevron concluded the session with an in-depth look at the pros and cons of advanced biofuels, and potential demand from competitor industries. Biofuel blends need to be considered at the next meeting of ISO 8217:2017.

A parallel session looked at various sustainable solutions was shortened following the unexpected withdrawal of Benjamin Weinacht, Managing Director of CMB, who would have been presenting on the company’s new hydrogen engines. However, Ulf Hansen of i-Tech introduced the Swedish company’s non-biocide hull coating solution, noting that taking action to reduce hull fouling remains the low hanging fruit of decarbonisation: reducing fouling could help to reduce emissions by up to 19% per year. Stam Achillas from Wärtsilä’s 2-Stroke Fuel Conversions team in Switzerland focused on the fuel efficiency opportunities presented by derating engines in older vessels, a subject to which The Motorship hopes to return.

Following lunch, the plenary session enjoyed a high-quality discussion on the latest development in the ammonia engine space. Kristian Mogensen, Promotion Manager, MAN ES confirmed that the first full scale engine test for MAN’s 2-stroke ammonia engine has been delayed until early 2023, while René Sejer Laursen of ABS provided a note of realism, outlining progress in recent ammonia-fuelled propulsion designs, but identified a number of wider ammonia safety issues, such as the long-term effects of exposure to low concentrations of NH3, or ammonia dispersion upwind of ports as worthy of further study. Dr Andreas Schmid, General Manager Technology Development, WinGD was compelling as discussed WinGD’s progress towards bringing a dual-fuel ammonia engine to market by 2025.

The scheduling of the event forced delegates to choose between the methanol and ammonia session. Delegates who listened to the excellent ammonia session missed an equally stimulating session on methanol, a fuel that has gained significant traction in the market in the past 18 months, as Matthias Ólafsson of the Methanol Institute explained. Dr Gwang-Hyeon Yu of Hyundai Heavy Industries proudly explained HHI’s leading position in the dual-fuel genset market for LNG carriers, and outlined the progress that HHI’s H32DF-LM engine has achieved since its recent launch, booking over 70 orders. Daniel Barcarolo of ABS’ Global Sustainability Center in Copenhagen concluded the session, clearly explaining the comparative advantages of methanol compared with competitor fuels in the alternative fuels space, touching on the safety, storage and emissions profile of the fuel.

The final session in the plenary room touched on the issue of multi-fuel engines. Rolf Stiefel of Bureau Veritas explored the technical possibilities but concluded that the economics of operating on different fuels need to factor in the likely cost of conversions between different fuel types. Eddie Fish of ExxonMobil offered a useful perspective on the potential source of different renewable fuels, adding that blue e-fuels, made in conjunction with carbon capture, were likely to become an increasingly important source of supply in the future. Harriet Brice of Lubrizol provided an additive supplier’s perspective on research into lubricant solutions, touching on challenges for lubricants formulated for ammonia and biofuels.

The final session of the day in the Retrofit session returned to the theme of wind power. Tuomas Riski of Norsepower powerfully made the case for ship owners to consider wind assisted propulsion as an element in their fuel efficiency strategies, noting the Rotor Sail technology offers annual CO2 emissions reductions of up 51 million tonnes. Karsten Hochkirch of DNV Germany offered an in-depth analysis of an MPV equipped with wind-assisted propulsion, but noted that the savings varied at different operational speeds, as well as according to the local climactic conditions. Claes Tretow, Project Manager Newbuildings, Stena RoRo AB concluded the session, by sharing the outstanding results achieved by its vessels, Stena Hollandica and Stena Brittanica, operating on methanol in the last 6 months. He caught the audience’s attention when he told them that by operating on 100% methanol with biodiesel as a pilot fuel, Stena RoRo expects to achieve zero emissions.