The majority of seagoing vessels with an engine power of at least 20,000 kW are equipped with a 3-stage air-cooled starting-air compressor nowadays. The technology, which offers heat reduction advantages, has been installed on ships ranging from container ships to tankers and cruise vessels. 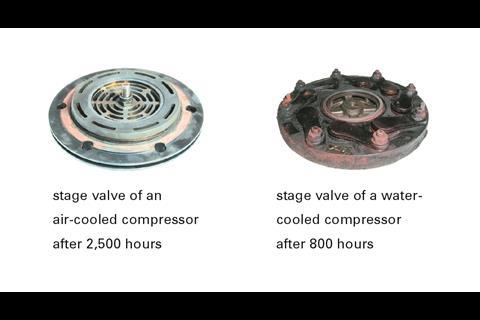 Live presentation of the 3-stage air-cooled compressors at a shipyard in Kobe, Japan, in 2008. A TEU container was specially equipped with a complete compressor installation similar to the one in an engine room. (© Sauer Compressors)

Sauer Compressors discovered the potential of 3-stage air-cooled compressors for the shipping industry early on and has therefore been a pioneer in developing these compressors for almost 50 years.

When the Railship I first entered service in 1975 on the Travemünde – Hanko route connecting Germany with Finland, it was the world's largest railway ferry. While its length of 180 metres was an achievement at the time, it bears no comparison with today's ULVCs (Ultra Large Container Vessels). However, that ferry was not just the largest railway ferry but was also the first to feature Sauer's new 3-stage air-cooled compressors. Almost five decades have passed since then, during which Sauer Compressors delivered over 30,000 of these starting-air compressors. Despite many developments, the basic operating principle of the technology has not changed a lot. "Today, about 80% of large container ships are equipped with 3-stage air-cooled compressors, making them industry standard", says Stephan Behrens, Global Head of Business Development Commercial Shipping at Sauer Compressors. However, there was a delay before the 3-stage air-cooled starting-air compressors established themselves as a standard. Many shipping companies and shipyards stuck with the previously common 2-stage water-cooled compressors, instead of switching to generally advantageous air-cooled machines.

To start the ship's engine, compressors fill 30 bar compressed air into air receivers whose volume is determined by the engine size. As required by the classification societies, the amount of compressed air must be sufficient for a certain amount of engine starts. The progressive development of larger ships and engines since the 1950s has therefore led to higher demand for compressed air. 2-stage water-cooled compressors were the most common solution for starting the ever larger diesel engines. Due to their comparably low fill-up capacity, the 2-stage air-cooled compressors that were commonly used for smaller ships were not a viable alternative.

"The building of large cargo ships was relocated to Asia and the local shipyards simply took over the established design standards", explains Behrens.

Only with the new millennium, the multi-stage air-cooled compressors were finally put on the standard makers list of the Asian shipyards. Sauer Compressors was able to convince ship owners and builders not only with references but also with specific demonstrations. For this purpose, a 3-stage air-cooled compressor was installed in a TEU container and presented worldwide. "The decision-makers were able to experience the benefits of the technology themselves, for example how the compressor works reliably at high ambient temperatures, with low-vibration, and that no condensate is produced in the crank drive since the compressor always adjusts to the ambient temperature", Behrens remembers.

The 3-stage air-cooled compressors are bigger and therefore have a significantly higher fill-up capacity than the 2-stage air-cooled machines. The total heat to be dissipated is divided between three stages instead of two and the heat-dissipating surface area increases while the heat-generating volume remains the same.

Cooling the starting-air compressor with room air removes the requirement for a cooling water circuit. "This can save installation costs of up to $7,500", states Behrens. Moreover, it avoids leakages and troublesome condensate in the crank drive that occurs when travelling through different climate zones. Other benefits are reduced space requirements in the engine room, higher reliability, and minimum operating effort of the self-regulating air cooling. There is no need to modify the fan output of the engine room ventilation, since the waste heat of the compressor is negligible compared to the heat of the ship's engine.

As the new generation of 3-stage air-cooled compressors is extremely powerful, the number of compressors required to reach the fill-up capacity that is needed for large ships is now lower than it was a few years ago. "A 24,000 TEU ship usually only needs three to four starting-air compressors, out of which one only serves as a reserve", explains Behrens.

Sauer Compressors is the technology leader in the field of 3-stage air-cooled compressors and covers the whole range of market requirements with two series. The models of the new SAUER Levante series are particularly powerful. "By introducing our Levante series, we have responded to the ongoing trend towards larger ships and are the only manufacturer worldwide to have recently presented a completely new development", says Stephan Behrens.

The compressor, exclusively developed for commercial shipping, is available in three different types with capacities between 275 and 460 m³/h at a final pressure of up to 30 barg. Thanks to their compact and space-saving design, the compressors fit into any engine room. A unique selling point of the design is the use of block coolers in all three stages. By installing the newly developed SAUER CubeCooler between engine and compressor, the air flow is optimised and moving components are shielded. Before their market launch, the Levante compressors have been tested for more than 20,000 operating hours on Sauer Compressors' test stands as well as on ships operated by partner shipping companies.

The SAUER Passat 3-stage air-cooled compressors are among Sauer Compressors' best sellers. With their unique reliability, efficiency and easy operation, the workhorse compressors have proven to be responsible workhorses. There are five different types of SAUER Passat compressors available, with capacities between 63 and 175 m³/h at a final pressure of up to 30 barg.

Looking forward, Behrens notes that there has been strong commercial interest in Sauer's upgraded 3-stage air-cooled compressor solutions.  The timing of the first LEVANTE delivery in 2018 was fortunate, meaning that Sauer's parts supply chain was stable during the pandemic. Furthermore, Behrens concludes, the constant order intake during the pandemic indicates a very good acceptance of the LEVANTE series in the commercial shipping market.