The Port of València plans to become the first port in Europe to incorporate hydrogen technologies into its terminal machinery operations.

Valenciaport’s has renewed its commitment to hydrogen by creating an advisory group open to ports around the world to help to develop the global hydrogen value chain. 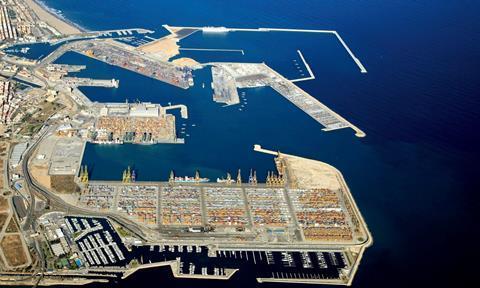 At European Hydrogen Week 2021 (EHW 2021), Juan Manuel Díez, head of strategic planning and Innovation of the Port Authoirty of Valencia (PAV), said: “Valenciaport is working on the European H2PORTS project to apply the use of hydrogen in terminal machinery.”

The H2Ports project aims to provide efficient solutions to facilitate a rapid evolution towards a low-carbon and zero-emission sector.

“It is a project that we are developing in the Port of Valencia that will allow us to apply this technology in our facilities. At the same time, it will serve to implement this energy in the supply chain as the ports have to be the allies of the logistics community in the reduction of emissions and decarbonisation,” said Mr Díez.

The Port of Valencia intends to install a hydrogen station or green hydrogen supply station at the beginning of 2022.

This station will be mobile and will provide the necessary fuel, in the appropriate conditions and quantities to guarantee the continuous working cycles of the equipment forming part of the H2Ports project.

The first of this equipment will be the machine or prototype of the reach stacker vehicle or “container stacker” which will be powered by this energy and which will be tested at MSC Terminal Valencia. The second piece of equipment to be serviced by the hydrogen plant will be a 4×4 tractor unit equipped with a fuel cell stack for testing in loading/unloading operations at Valencia Terminal Europa of the Grimaldi Group.

Mr Díez added: “It is important that we explain our experience to other ports that can act as promoters of these clean energies,,…which is why we are part of the Clean Hydrogen Alliance and the Global Ports Hydrogen Coalition. In addition, within the framework of the H2 Port project, we have created an advisory group open to more than 65 members and 30 ports from all over the world in which we are working on the construction of the hydrogen value chain for ports.”

The European project “H2PORTS - Implementing Fuel Cells and Hydrogen Technologies in Ports” is coordinated by the Valenciaport Foundation and the PAV, and financed by the Fuel Cell and Hydrogen Joint Undertaking (FCH JU) programme.