Buoyant enough for the market

The Deepwater Enabler is the response to a tipping point according to Bob Rietveldt of Ulstein. Cheap is no longer really viable if it limits what you can do, and given this, ‘more is better’ - Stevie Knight explains. 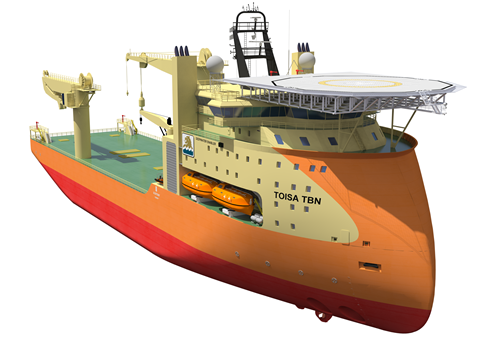 It certainly is ‘more’. The Ulstein X-Bow design measures 160m long by 32m across the beam, while power generation is by two 4,200kW gensets and four others of 3,700kW each– that is a massive 23MW altogether. The power, which is configured to DP3 class notation, is pointed at three, 3,700kW mounted azimuthing thrusters, a pair of retractable azimuthing units of 3,500kW each and two tunnel thrusters which add another 2,500kW each – plus of course some heavy-duty onboard machinery.

At this point, it’s natural to ask ‘why?' The answer, says Mr Rietveldt lies in part with a changing markets in deepwater subsea construction, offshore windturbine installation and IMR requirement for existing and future offshore fields. “For example, although jackups used to mop up most offshore wind construction projects, their operations are usually limited to mid-range waters and seas not much over 1.5m significant wave height,” he points out. So, the trend toward deeper waters means a return to displacement vessels armed with active heave compensated cranes. He also adds that the jackup barge’s natural offshore-wind hunting ground is still subject to the turbulence of politics, and single application craft can be all too easily left hanging around with not enough work, pretty much on the whim of political expediency.

So, the ship has been designed with the ability to crossover from roles as diverse as well intervention or even slim hole drilling – and as a turbine installation vessel it also benefits from an alternative skidding system. Further it has all the relevant STCW and IMO offshore dwelling unit codes in place for its 140-person accommodation. “Owners putting money into ship investment really don’t want a vessel to be left sitting on the quayside,” says Mr Rietveldt. In other words the ship has got to be buoyant; not just to withstand bigger seas, but in order to ride the market.

Mr Rietveldt goes on to say he believes that owners have taken a pragmatic, ‘value for money’ approach despite the added outlay. While a vessel like the Ulstein Deepwater Enabler could at present cost around a quarter more than a normal jackup, “you get a much more flexible ship, one that’s capable of seabed intervention work in a wide range of waterdepths”. He adds, “It’s a relatively small amount of extra investment, giving a much better, more robust business case...”

However, so much is going down to the seabed it does require a different kind of strategy ‘up top’. Mr Rietveldt says surveys show the forecasted equipment sizes are definitely rising. For example drill rig manifolds have risen from 200 tonnes to more than double this in just a couple of years. He points out, “In order to install a 400 tonnes manifold unit at any depth you need a 900 tonne crane on the surface. You are further away from shore too, so you need to carry a lot more with you; a bigger capacity vessel with a large available deck area is a must, as you don’t want to have to go back. It all drives that spiral upward... and it all puts pressure on the deck space.”

So as Mr Rietveldt points out, “empty space is valuable – although this usually gets forgotten”.

“Every deck on a new build starts open enough, but they usually get filled up pretty quickly,” he says, “despite the fact that everyone knows it’s not efficient to go around with full pockets all the time.” Deepwater Enabler on the other hand is designed to carry what’s needed to the field on or below its 3,350m² deck area, use it, and then put it away in the toolbox.

So, beyond the capacious 7.2m x 9.4m square moonpool there are a number of options: a 900 tonne fully revolving and heave compensated crane and a 250 tonne knuckleboom crane can be fitted on the deck while underneath there’s an A&R winch and provision for a 3,500 tonne carousel which can be mated with different laying spreads. A future J-lay option can be deployed over the stern with a quadruple joint single station tower, the Flex-lay pairs it with a 550 tonne tensioner system and a reel layer can hold up to 3,500 tonnes of 16in OD pipe if necessary.

How it achieves all this is interesting: “Everything below deck is already in place, and we’ve kept things like the deck crane positions well out of the way. So for example if you want to use Flex-lay mode there’s a hatch from where the carrousel can simply be fed. We have also kept the interfaces, the power and hydraulic links at deck level; you don’t have to open up the vessel to put in the connections.”

Despite this, it’s not all about ‘bigger’. Mr Rietveldt points out that the Deepwater Enabler will certainly support the huge emerging reservoirs in West Africa, Brazil, Australia and the Gulf of Mexico, but the offshore sector is involved in continuous research to get that much more out of existing infrastructure, so smaller pockets of gas and oil can be integrated via a tie back. “However, you don’t want to mobilize a very large drill ship for one small hole in the North Sea. If you use a more modest scale ship to take on enhanced field recovery, it results in very significant savings.”

But how is the market going to look for this scale of craft in the future? “Right now across the market there’s maybe three, or four similar sized vessels being built, and we do expect the options to be exercised on this design,” he says. Despite this the market will be far from being flooded, and Mr Rietveldt foresees a need for as many as 15 or 20 craft of this type in the next four or five years: “Given the lead in time I’d expect shipowners to start some kind of speculation on this kind of vessel in the very near future.”

The first vessel is a customised Deepwater Enabler design for Sealion/Toisa presently under construction at Hyundai Heavy Industries in Korea, and due to be undergoing sea trials in the first quarter of 2015.