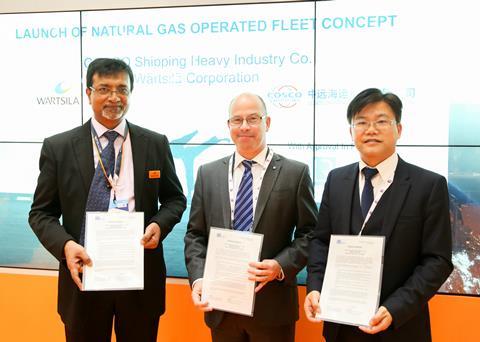 The development project was carried out under the terms of a memorandum of understanding cooperation signed in June 2016 between the three companies.

"This is a new and innovative fleet concept that is designed to create better efficiencies for companies involved in any part of the natural gas supply chain,” said Sanjay Verma, director, business development, South East Asia, Wärtsilä Marine Solutions.

LR completed a preliminary hazard identification (HAZID) study for the design which covered the fuel gas supply system, the transfer of LNG between the vessels and the mooring arrangement of the fleet.

The aim of the concept is to offer global operators a more efficient and economical fleet design that meets current and anticipated environmental requirements according to the classification rules.

It comprises four vessels; a pusher tug to make all the units mobile and transportable, LNG storage barge, LNG regasification barge, and a floating liquefaction natural gas barge. The pusher tug can be used to transport the three barges.

Number and choice of units will depend on an individual project. For example, the concept can be utilised to act as an LNG carrier (using only the pusher tug and LNG storage barge), or it can be used for more complex projects involving liquefaction and regasification systems (using all units).

The modular design of Wärtsilä's liquefaction and regasification units makes this an ideal concept for gas plants in the 50-200 MW range. The low draft design also makes it very attractive for gas power plant projects in South East Asia.

This project has attained the authority of China's National Patent Office and has been conceptualised by CHI.

It is expected that when ordered, the fleet vessels will include Wärtsilä dual-fuel engines and steerable thrusters, the Wärtsilä LNGPac gas storage and supply system, a Wärtsilä liquefaction module, a Wärtsilä LNG cargo handling system and a Wärtsilä regasification module.