The first commercial installation of Airseas’ automated kite wind-assisted propulsion solution on board a commercial vessel has been completed, with commercial operation of the system expected to begin in the second half of 2022.

The installation of the first Seawing system on board the Ville de Bordeaux, a specialised RoRo vessel operated by Louis Dreyfus Armateurs on behalf of Airbus, which transports major aircraft components between France and the United States. 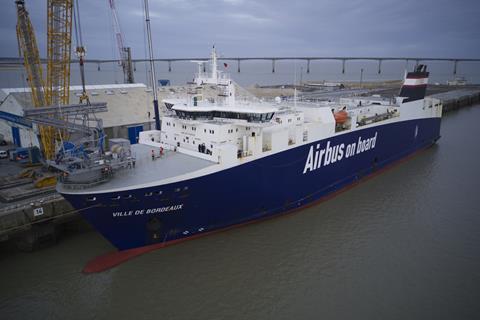 The 500m2 Seawing system will be deployed on monthly transatlantic journeys from January 2022, conducting six months of sea trials and testing ahead of its full operation.

Airseas has received formal approval from leading classification society Bureau Veritas to begin operations at sea, following three years of close collaboration on the development and early trials of the Seawing.

Founded by former Airbus engineers, Airseas has brought insights from the aeronautical sector, including digital twin and automation technology, to the maritime industry. This means that the Seawing can be safely deployed, operated and stored at the push of a button, and can be retrofitted on a ship in two days.

Airseas’ full-size Seawing is a 1000m2 parafoil which flies at an altitude of 300 metres, capturing the strength of the wind to propel the vessel. Based on modelling and preliminary testing on land, Airseas estimates that the Seawing system will enable an average 20% reduction in fuel consumption and greenhouse gas emissions.