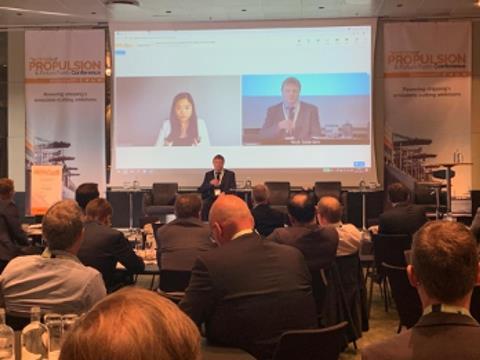 The extension of the EU’s Emission Trading System (ETS) to cover emissions from vessels above the 5,000gt threshold was expected to enter effect by 2024, depending on the progress of the legislation through the European Council and the European Parliament, Ngoc-Lan Lang of the European Commission announced during a question and answer session.

Ms Lang mounted a robust defence of the extension of the ETS to cover shipping, noting that emissions from the shipping sector represented over 13% of the EU’s greenhouse gas (GHG) emissions. While the shipping sector had not been included in previous legislation, it was consistent with the bloc’s broader decarbonisation objectives to include it in July 2021, when the European Commission presented plans to lower GHG emissions from the EU by 55% by 2030 (compared with a 1990 baseline).

A fair appraisal of the overall Fit for 55 package would recognise that it might actually boost shipping, Ms Lang noted, adding that the Commission had a goal to shift up to 75% of goods traffic within the bloc from the road to rail or inland waterway transport.

Ms Lang noted that it was the intention that the scheme’s profits would be allocated to support research and development into solutions for the maritime industry.

When asked about the EU’s decision to extend the geographical scope of the scheme to include journeys between the EU and third countries, which would be subject to the ETS applied at a 50% rate, Ms. Lang responded that this was necessary to encourage the industry to work to reduce emissions more broadly.

The proposed extension of the EU’s ETS to cover aviation had encouraged the aviation industry to work to reduce emissions, Ms. Lang noted. From a practical perspective, this was also justified to avoid the scheme leading to unexpected outcomes, such as trade diversion.

In closing, Ms. Lang noted that the scheme had been specifically designed in order to take into account the potential introduction of market-based measures by the IMO. A clause in the legislation will require a review of the scheme to be held in 2028.