The world’s first LNG-fuelled icebreaker has received liquefied natural gas (LNG) fuel in January from the Pori LNG import terminal and in February from the Manga LNG terminal located in the Röyttä Harbor in Tornio, Finland. 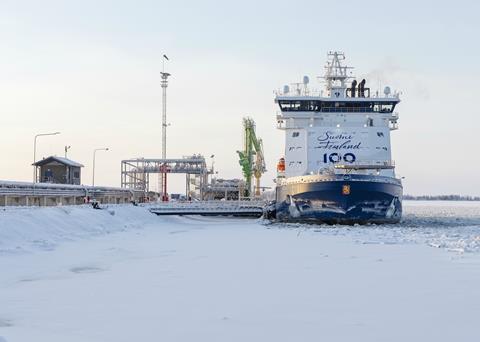 The gas and fuel market of northern Finland will expand when the commercial use of the Tornio import terminal begins later this year. Access to LNG is important for competitiveness and the terminal is intended to meet industrial as well as land and maritime transport needs.

“LNG is excellently suited for use as a marine fuel as it's a great alternative to oil, and being environmentally friendly is one of its strengths,” said Tommy Mattila, sales and marketing director, natural gas and LNG, Gasum.

“We’ve already supplied LNG for northern ports such as Luleå, Sweden, and Kemi and Oulu, Finland. Polaris is the first vessel bunkered in Tornio. The start of the commercial use of the Tornio Manga LNG terminal strengthens Gasum’s LNG supply chain in Northern Finland and Sweden for industry and maritime transport,” he added.

LNG meets the requirements set by the sulphur directive regulating shipping emissions as well as the stricter emission limits to be applied in the future. It does not contain sulphur and its combustion generates 87% less nitrogen oxides as well as reducing CO2 and particulate emissions.

Gasum has an LNG production plant and terminal in Risavika, Norway, LNG terminals in Øra, Norway, Lysekil, Sweden and Pori, Finland. Gasum is a joint-venturer in the Tornio Manga LNG terminal with Outokumpu, SSAB Europe and EPV Energy.