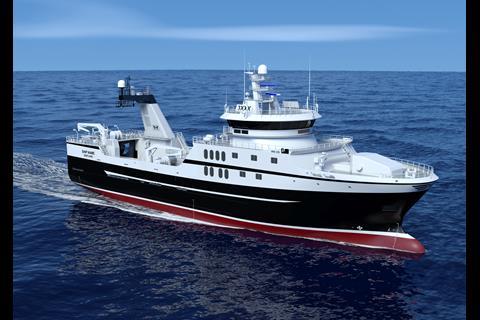 The NVC 370 design stern trawler under construction for Norwegian owner Prestfjord Havfiske in Spain will feature a prototype permanent magnet winch and one of the first new B33:45 engines 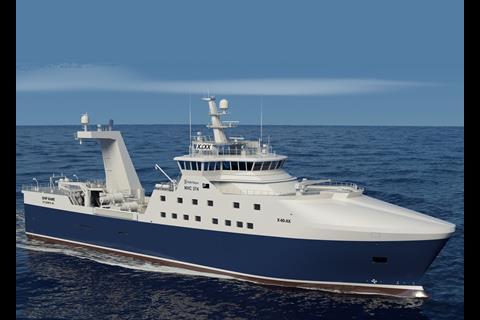 A recent visit to Norway’s maritime clusters confirmed what myriad newbuild contracts over several months suggest: the Northern European market for new fishing vessels is booming. Offshore ship operators are looking with envy at a sector offering day rates that the depressed oil and gas markets cannot afford to match, and underlying economic conditions mean the fishing sector is ripe for investment.

Fishing is fundamental to the history of many of Norway’s most advanced shipbuilders and ship operators. Only with the regional oil and gas boom beginning in the 1970s did they shift their focus to the sea’s mineral, rather than animal, resources. Now the same companies are re-examining their heritage as they search for alternative markets during the offshore lull.

Among those companies is Ålesund-based Rolls-Royce Marine, which has been involved in several of the recently announced contracts for newbuild fishing vessels. The company has always been involved in designing and selling equipment to fishing vessels, and has witnessed the growing interest in the market first hand. In June alone Rolls-Royce announced orders for the design and equipping of three vessels: two NVC 374 stern trawlers for Deutsche Fishfang-Union (DFFU) and an NVC 387 live fish carrier for Norwegian shipowner Sølvtrans (with an option for a similar vessel). In September it followed those orders with a contract for another trawler, also of NVC 374 design, for an undisclosed Canadian owner.

According to Monrad Hide, vice president sales & contract for fish and special purpose vessels, three main factors underpin recent renewed interest in the sector. “This is a cyclical business and there are many drivers now that are good for fishing, which in the end translates into newbuilding. From the owner side low fuel prices are good for fishing generally. Some types of fishing are very sensitive to fuel economy, so for instance a stern trawler with a double-rig trawl has very high fuel costs.

“Secondly, most of the fish prices – white fish, pelagic fish and shrimp, for example - are very good right now. And the building prices for new vessels have come down a bit. In Norway especially, the exchange rate against the euro, sterling and the dollar is in favour of exporting.”

Those factors are driving interest in the North European market and, for now, counterbalancing the pressure placed on the industry by embargos on selling fish into China and Russia. And in a new wave of building, the latest vessels are being made bigger and more technologically advanced than their predecessors.

Rolls-Royce has long viewed the fishing market as an important test-bed for new technology. Its hybrid shaft generator was tested first on a trawler, enabling electricity to be generated at constant frequency even when the propulsion shaft speed changes. Several engines have made their debut on fishing vessels, including the recently introduced medium-speed Bergen 33:45, which features in several new orders. And the company’s XT140 winch, driven by a permanent magnet motor, begins trials this month onboard new fishing vessel Langøy, operated by Prestfjord Havfiske (see sidebar).

In 2012 the company launched an experiment to gain a fuller understanding of the year-round operational profile of a trawler. Another vessel operated by Prestfjord Havfiske, the Kleven Myckelbust-built trawler Prestfjord, was fitted with around 200 sensors measuring power output across its running machinery against weather conditions.

“We now have two to three years’ of data from that vessel telling us how they operate,” explains Hide. “We know how many kilowatts they use on different winches, engines, shaft generators, how much rudder angle they have in single trawling or double trawling, and how weather and sea conditions affect the vessel. This gives a fantastic understanding of how the vessel operates and the kind of power it needs in different operating conditions. We can share this data with operators and it has led to changes in how much power some will install on their vessels.”

The main finding from that research, Hide reports, is how vessel operators can often benefit from installing less main engine power, using hybrid diesel-electric propulsion to tackle the peaks when more power is needed. Such hybrid propulsion systems are becoming more prevalent in the fishing industry, as recent orders suggest – although Hide notes that in a conservative industry some operators (particularly users of stern trawlers and vessels requiring year-round operations) still believe in greater installed power.

With its wide product portfolio – including engines, propulsion systems and deck equipment as well as the automation, electronics and data-logging capabilities that made the Prestford project possible – Rolls-Royce is well positioned as a system integrator for today’s advanced fishing vessels. It is a role that Hide says the company is increasingly being asked to play, with owners and builders who do not have integration expertise preferring to deal with one supplier as opposed to many.

“Our strength is to build the equipment we make into a system,” he says. “We see more and more owners come to us because they want a system that works. They don’t want products from all over the world but a working system, and they don’t want to have to relate to several suppliers to fix problems.”

Two rapidly developing vessel types exemplify the sector’s growing complexity. Live fish carriers have been in use for decades. But while they used to be simply converted trawlers, today they are purpose built vehicles more akin to ‘fish hospitals’, Hide says. The standard of transport conditions for live fish is far more rigorous than other fishing vessels, with water quality and oxygen levels closely controlled. Modern live fish carriers must also be able to disinfect any diseases found in fish – a perennial problem in the intensive fish farming that is flourishing in Norway and elsewhere. Strict quarantine regulations are therefore in place for moving such vessels around different regions. All these demands must be reflected in the vessel design.

Another trend affecting design is the emergence of onboard factories, installed with the aim of wringing even greater profit from the catch. While the guts of fish caught used to be thrown back overboard, operators are now looking at extracting protein, filleting, freezing and further processing fish onboard. Such operations add complexity both in the amount of installed power required, and in planning for the space needed by specialist equipment.

Rolls-Royce’s systems integration expertise, allied to its long experience of designing fishing vessels (the NVC moniker dates back to 1999, when the company acquired established designer NordVest Consult), means the company is both ready to capitalise on the current growth in vessel building – and well-resourced to meet the demands of today’s more complex vessel projects.

Growth in the fishing vessel market in Northern Europe will not be unchecked. As well as the Russian and Chinese embargos placing pressure on the business, there are also the built-in restrictions on how many vessels operators can use – in Europe this is limited by the gross tonnage of an operator’s fleet, while in Norway each vessel is allocated a quota for the weight of fish it can catch. Either way, the policy adds a challenge to operators hoping to replace tonnage – they must either dispose of existing vessels or buy new tonnage/quota allowances. As a result, a functioning market in second-hand fishing vessels is crucial to fleet renewal.

According to Hide, the second-hand market is buoyant at present, driven by sales of Norwegian vessels to Russian owners in the absence of newbuilding in that country. As long as that situation remains – and as long as the favourable climate caused by low oil prices, cheaper shipbuilding and strong fish prices exists – Rolls-Royce Marine and its counterparts will welcome the growth in the fishing vessel segment as other sectors feel the pressure.

Several Rolls-Royce Marine technologies have either been tested on or had their initial launch with fishing vessels. Some recent developments include:

The first Bergen B33:45 engine was delivered to Norwegian customer Prestfjord Havfiske in June 2015, for a 69m long stern trawler of NVC 370 design under construction at Freire Shipyard in Vigo, Spain.

A prototype of Rolls-Royce’s permanent magnet (PM) winch will also be installed on the above vessel. The first commercial sale of the final product was announced in early September, to be installed onboard a new shrimp trawler for an undisclosed Canadian owner to be built by Vard in Aukra, Norway.

The first hybrid shaft generator to be delivered (although not the first to be ordered) were installed onboard a Norwegian-owned purse seiner of NVC 317 design named Fiskebas. The contract was signed in November 2011.