The maker of a system that injects a methanol and water emulsion into oil-burning engines is offering a contractual guarantee that it will cut total fuel costs by 10%. 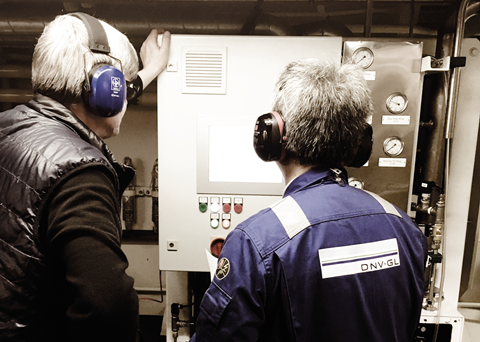 The system, which injects a methanol and water emulsion to cool and clean combustion, has been approved by class society DNV GL

FuelSave’s FS Marine+ uses an onboard hydrogen synthgas generator to inject a gas and liquid solution of methanol and water into the combustion chamber. In laboratory tests on a single-cylinder engine the solution was shown to significantly increase fuel efficiency by 11.8%, cut NOx emissions by 36% and reduce filter smoke number (a measure of particulate emissions) by 40%.

The system could enable operators of older tonnage to achieve IMO Tier I and Tier II NOx compliance. Although in isolation it cannot reach the IMO Tier III limit required for newer vessels, it can be used with after-treatment to improve fuel efficiency.

The system can be used in most two- and four-stroke engines and achieves best results with liquid fuels including heavy fuel oil, marine diesel and gas oil. It has been tested by FVTR, an independent laboratory at the University of Rostock, as well as on one of Europe’s biggest crane vessels as part of a 30-month trial.

Engine wear was found to have been reduced compared to the vessel’s engines that operated without the solution, due to the cleaner combustion resulting in cleaner cylinder heads, greater cylinder lubrication efficiency and substantially fewer carbon deposits. Engine vibration was also reduced noticeably.

Mark Sima, co-founder, FuelSave, noted that savings in the field test were greater than in the laboratory, showing net fuel savings of around 15%. “Through independent analysis and reports from engine service and maintenance companies, as well as from a university testing institute, we are confident in introducing the product to the maritime market," he said. "Our pricing model provides a return on investment of just three years within a five-year standard warranty period, extendable for 15 years to further maximise return on investment.”

The technology, which runs autonomously without the need for crew training, has been approved by DNV GL and can be retrofitted to any vessel. FuelSave plans to roll out the solution over the next two years, by which time it hopes the system will be approved by marine engine builders.