A new generation of ferries has been ordered in China to serve passenger and freight traffic between Britain and continental Europe on the busiest and shortest crossing of the English Channel, writes David Tinsley. 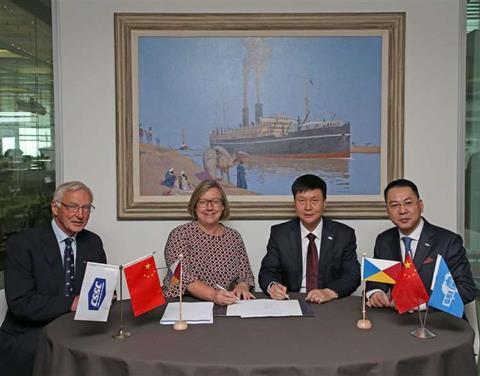 The EUR260 million (US$286m) investment by P&O Ferries calls for two ro-pax vessels which will be the largest-ever to sail the Dover/Calais route, designed to set new standards in reliability, cost efficiency and environmental compatibility.

Deliveries are expected in 2023, and the contract with Guangzhou Shipyard International includes options on third and fourth ferries for completion the following year. The concept design has been provided by the Danish consultancy OSK ShipTech, and entails a double-ended configuration and a diesel-electric power and propulsion installation incorporating large battery packs.

Maximum capacity for 1,500 passengers will be complemented by a freight intake on main and upper decks corresponding to about 2,800 lane-metres, plus provision for some 200 cars and vans on a separate, dedicated deck. The ro-ro payload is thereby only slightly greater than that of the P&O’s 2011/2012-built Spirit-class ships, but with a reduction in passenger numbers by around 250. The length overall has been increased to 230m from the 213m of the preceding generation.

Rapid turnaround and scheduling demands reflected in the design encompass not only the ro-ro layout and access arrangements, but also the shiphandling characteristics. The optimally-shaped hull will be equipped with two azimuth thrusters at each end, eliminating the need to go about in port, and promising increased directional stability. The power and effectiveness of the system also takes into account the ability to manoeuvre independently in very strong wind conditions.

P&O stated that the new breed of ferries will cut fuel use by 40% through a combination of fuel-based and battery propulsion. All surplus energy generated by the engines will be stored in the batteries, enabling machinery to be run at optimum level, with the charging of the battery pack taking place when excess energy is being generated, and battery power being called upon at periods of peak demand.

The adoption of a double-ended layout, and with a wheelhouse at each end, plus thruster-type, diesel-electric propulsion, is anticipated to save seven minutes of time on both outbound and return journeys. This alone will yield a one ton fuel reduction, a sixth of the amount consumed on the entire 21-mile crossing.

Most significantly, perhaps, the newbuilds have been conceived for a carbon-neutral future, contingent on the installation of extra battery capacity and the availability of ‘plug-in’ charging points at the ports.

To enhance the travel experience across the Strait of Dover, the design provides 1,550m2 of outside deck space for passengers and double-height windows running around the entirety of the middle of each ship on decks 8 and 9.

The ferries will be built to facilitate adjustment of the passenger facilities in accordance with reduced demand during off-peak sailings, whereby up to two-thirds of the passenger spaces can be closed. The power management system will use innovative software to turn off lighting and ventilation in areas unused.

Janette Bell, P&O Ferries’ chief executive said “These will be the most sustainable ships ever to sail on the English Channel, providing the best ever customer experience and setting new standards for reliability and cost efficiency.” Company chairman Robert Woods added that “This major investment in a new generation of super-ferries is a powerful testament to the commitment of DP World, our owner, to enable trade flows between Britain and Europe by providing first-class shipping capacity for many years to come.”

For Guangzhou Shipyard International, the deal signifies a further strengthening of the Chinese builder’s position in the global ro-pax ferry construction market. It follows orders from operators including DFDS, Algerie Ferries, Moby Lines and, most recently, COSCO Shipping Ferry Corporation of Dalian.