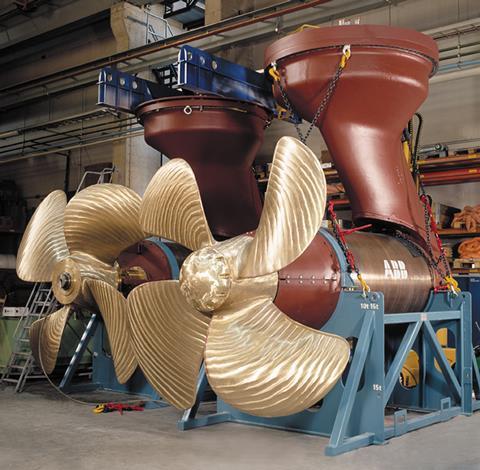 ABB claims that the gearless Azipod propulsors are the best-selling podded propulsors around, with the Azipod X and Azipod VI products having built up a record as long-time market leaders in demanding applications. Among the references for these Azipods are high-powered cruise ships with each propulsor handling up to 20.5MW power, and high ice-class vessels operating independently in remote Arctic areas. The ‘little sister’ in the Azipod propulsor family is the Azipod C gearless propulsor series, which is gaining a foothold in the market for azimuthing propulsors between 1MW and 5MW power – a market that has historically been dominated by geared mechanical propulsors.

The Azipod C gearless propulsor was first introduced to the market in the year 2000. It is available both as an open propeller version, Azipod CO, for typical ship applications and as a nozzled version, Azipod CZ, mainly for DP applications. The power range of the Azipod C series varies from 1.0 to 4.7MW. As of today, Azipod C propulsors have gained over two million cumulative operational hours. Deliveries include references from all major vessel segments: drilling, offshore supply, offshore construction, accommodation, heavy-lift, wind turbine installation, research, tanker, ferry and yacht segments.

The Azipod C gearless propulsor is designed to improve three major aspects of operational profitability throughout the vessel’s lifetime: efficiency, reliability and cargo capacity. How these aspects are improved is explained below, along with an insight into long-term operational experience.

The most basic factor in the operational profitability of a thruster is the total efficiency of the propulsor affecting the vessel’s fuel consumption. Total efficiency can be divided into four subcategories:

The open propeller version, Azipod CO, is a pulling propulsor. The advantage of a pulling design becomes apparent with higher ship speeds – roughly from 10 knots onwards. In a pulling unit the water inflow to the propeller is more uniform. There are no low-speed inflow areas in the propeller wakefield as there are in pushing units, where the propeller works closely behind a propulsor strut, or in an ordinary shaftline propeller that works behind the shaftline support structures.

The more uniform wakefield enables optimisation of the propeller blade design, offering higher efficiency and a higher margin against undesired cavitation. In addition, the costa bulb effect of the motor module further increases propeller efficiency. The pulling design means taht the efficiency improvement in transit speeds can be as much as 10%, compared with a pushing propulsor or shaftline.

Propulsors equipped with a nozzle, also known as a duct, are normally installed on vessels where DP operation is a major part of the operational profile. The effective thrust per power, i.e. N/kW (newtons per kilowatt), at zero ship speed or close to zero ship speed, is essential for the hydrodynamic design of a nozzle propulsor such as the Azipod CZ.

In contrast to transit speeds optimised propulsors, a pushing propulsor is able to reach high thrust efficiency at low ship speeds. As the inflow speed is very low due to low vessel speed, it is more beneficial to keep propulsor structures away from the propeller-induced slipstream.

The Azipod CZ is a pushing unit with a nozzle profile tailored and optimized specifically for its structure. The strut is located further from the propeller, compared with a conventional nozzle propulsor, providing better inflow and a more uniform wakefield for the propeller also in the bollard condition.

The Azipod CZ was the first nozzle propulsor on the market that featured a significantly tilted (7°) shaftline and nozzle arrangement. The tilted shaftline improves effective thrust significantly, as interaction with the ship’s hull or other thrusters can be avoided, especially during DP operation. In addition, the effective thrust of forward thrusters during the transit operation is improved; as in the case of drillships.

The effective thrust improvement from a tilted shaftline and nozzle is 10% to 30% during DP operation, compared with a non-tilted design.

As conventional geared propulsors are powered with an inboard induction motor, one unique and advanced feature of the Azipod C gearless propulsor is the permanent magnet propulsion motor. Unlike normal electric motor types, the rotor of a permanent magnet motor is naturally magnetised. Thus, the additional power consumption for magnetising the rotor is saved.

In an Azipod C propulsor, the minimum electrical losses of submerged permanent magnet motor are cooled directly to the surrounding seawater passively through the motor’s casing. Thus, a cooling water pump and cooling air fans are not needed in the Azipod C system. In addition, savings are gained due to the absence of other auxiliary systems that are present in a conventional propulsor, including a bevel gear lubrication system and possible steering hydraulics. See Figure 3 for a comparison of auxiliary systems.

The absence of both gear lubrication and propulsion motor cooling systems improves the propulsor’s total efficiency, typically by 1% to 2%, depending on the loading profile.

Reliability of the propulsor is vital to shipowners. Failure in propulsion may decrease the safety of the operation, especially in rough seas. It may also lead to discontinuation of the vessel operation and significant reduction of the income provided by the vessel.

Normally, propulsors on ships are maintained during dry-docking of the vessel every five years. However, there is some push from owners and operators to increase dry-docking periods from five to seven years or even more.

In the offshore business, semi-submersible drilling rigs, for example, are not dry-docked at all and their many propulsors, usually eight per rig, are overhauled by demounting a few propulsors at a time. The change-out of propulsor is carried out underwater with the help of divers. The extra replacement unit is changed-in and the demounted propulsor is overhauled (critical components inspected) and put in service rotation.

The Azipod C design has some major advantages to ensure safe and reliable operation over the overhaul period:

Long-term experience with the Azipod C propulsor has been well documented. So far, the longest continuously serving propulsors have been in operation for close to nine years before an overhaul. Several guests at an offshore oil and gas industry seminar, held in February 2014 at ABB’s Houston Ship Channel workshop facility, were able to see the condition of the critical parts taken out from one of the long-serving Azipod C propulsors. The Azipod CZ propulsor was disassembled one week before the seminar and it came fresh out of operation after a swap-out at the end of 2013. The components showed hardly any wear and tear and most of them could be reused after a thorough inspection and partial reconditioning.

The seminar included a hands-on session where the audience could touch and inspect components such as the thrust, slewing and propeller-end bearing, shaft and slewing seals and the service brake. The strut of the unit and the stator and rotor of the propulsion motor were exhibited for inspection as well. The event was well received by guests from the oil and gas and offshore industry, including visitors from drilling companies, shipyards, operators, classification societies and designers.

A smaller footprint is an advantage for any onboard equipment, especially with compact vessels such as anchor handlers, offshore supply and construction vessels and ferries. One significant benefit of the Azipod propulsor is that the large propulsion motor is placed underwater, next to the propeller, saving valuable onboard space.

This saved onboard space is typically used to:

The above possibilities help to improve the operational profitability of the vessels by improving payload and lowering fuel consumption.

Since 2000, experience has verified the inherent benefits of the gearless podded design with regards to efficiency, reliability and space savings. Further features of the Azipod C propulsor include, for example, a permanent magnet motor and simple auxiliary systems.

The combined annual fuel cost savings, including improvements in hydrodynamic, mechanical and electrical efficiencies, can be realistically estimated to be from 10% to 30%, compared with a conventional geared azimuthing propulsor.

The reliability of the gearless design has been demonstrated by over 2 million accumulated running hours with Azipod C propulsors. Long service intervals and excellent reliability improve savings from maintenance and out-of-operation costs for operators and owners.