This year''s Gas Fuelled Ships Conference, sponsored by DNV GL, heard the opinions of industry experts as they discussed moving to the future. 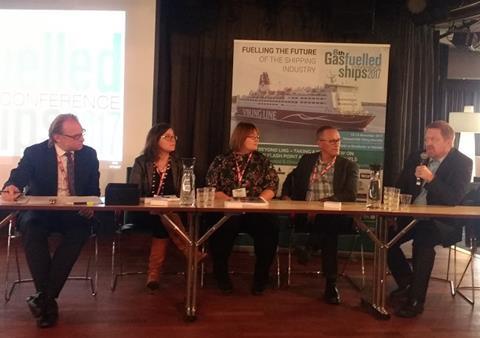 Kaila spoke about the achievement of zero emissions being a key driving force behind Wartsila’s current projects. She also touched upon the possibilities for using hydrogen in the maritime industry and presented a brief comparison on the practicalities of the availability, transport, storage and bunkering of hydrogen in comparison with LNG.

Savijoki commented on fuel energy utilization during the panel discussion explaining how they understand the potential for improvement in future projects with the use of case specific energy flow modelling which is already being used during the ship concept design stage.

Gerd Wuersig of DNV GL spoke in reference to Meyer Werft’s work on board the Mariella and about their wider work with fuel cells, stating that it is one of the most serious developments in design that he has seen in recent years.

Westerlund added the importance of involving the crew in the decision process of introducing alternative fuels to ensure their willingness for the requirements of additional training and change in daily on board routines.

Gas Fuelled Ships 2017 closed with an announcement from the editor of the Motorship Magazine, who revealed plans for the launch of a combined, enhanced event called Propulsion & Future Fuels. This conference represents a merging of the Propulsion & Emissions Conference, next year celebrating 40 years, and what would be the 9th Gas Fuelled Ships Conference.

Over the past decade or so the Gas Fuelled Ships conference has explored the evolution of not just LNG but other clean, low-flashpoint fuels, to the point where they can no longer be considered in isolation from more mainstream propulsion choices. With the 2020 global sulphur cap approaching, operating within the constraints of the Energy Efficient Design Index and with tighter CO2 emissions measures almost certain by 2023, these so-called alternative fuels are now an essential feature in ship owner’s propulsion considerations.

The Motorship’s events are changing to reflect this shift, and to take advantages of emerging synergies in discussions around propulsion and alternative fuels.

For more information contact the Events team on +44 1329 825335 or email gasfuelledships@motorship.com