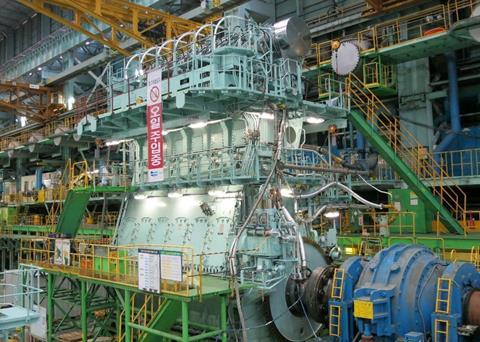 The company confirmed the order reported by The Motorship, and revealed that the four tankers will each be powered by a seven-cylinder, 620mm bore 7X62DF engine, rated 13,800kW at 86rpm. The engines, which are compliant with Tier III NOx levels when burning LNG, will be fitted with low-pressure selective catalytic reduction (SCR) plant to enable Tier III compliance when burning heavy fuel oil, distillate or hybrid residual fuels.

WinGD will also supply its Engine Diagnostic System, targeting increased availability, lower fuel costs and extension of predicted times between overhaul through monitoring and performance optimisation. Under a contract signed with SCF on 17 March, the engines will be built by Hyundai Heavy Industries (HHI) Engine & Machinery Division in Ulsan and delivered to HHI’s Samho yard where the 114,000dwt ships are to be built.

Martin Wernli, CEO, WinGD, said: “This order represents a vote of confidence in X-DF and a recognition from SCF Group and its partners of the benefits of low-pressure X-DF technology to both their business and the environment. Further, with this project the SCF Group has raised the bar for environmentally-friendly Aframax tankers.”

WinGD has also confirmed to The Motorship that it will supply X-DF engines to Aframax tankers ordered by AET Tankers. Those vessels will feature six-cylinder X62DF engines.

The engine developer, which has also seen its X-DF technology installed on chemical tankers in the Baltic and asphalt carriers in China, noted that the Aframax application again showed the potential for applications of its low-pressure injection, Otto cycle LNG technology beyond gas carriers.

Book your place at the Gas Fuelled Ships Conference to hear about the latest dual-fuel engines from industry leaders such as WinGD and MAN Diesel & Turbo.

For further details contact the Events team on +44 1329 825335 or email gasfuelledships@motorship.com.