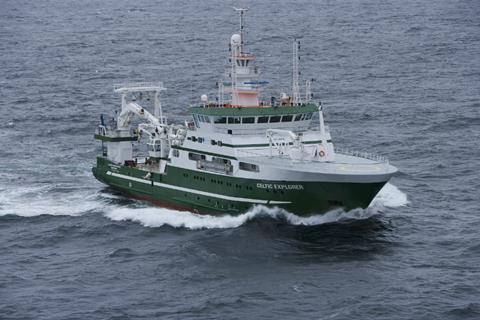 The 53-metre vessel will be based on a design developed by the Norwegian consultancy Skipsteknisk and constructed by Astilleros Armon at Vigo, in Galicia.

The state-of-the-art newbuild will replace one of the Marine Institute’s two existing ships, the 32-metre Celtic Voyager, dating from 1997, and will complement the larger, 65-metre Celtic Explorer, which was also designed by Skipsteknisk and delivered by Damen Shipyards Group of the Netherlands in December 2002.

The project was initiated under the Irish government’s integrated maritime plan, Harnessing our Ocean Wealth, and in line with national marine research and innovation strategy. The new vessel will support Ireland in addressing research challenges arising from the UK’s planned secession from the EU and the Common Fisheries Policy, as well as climate-induced impacts on the oceans.

She will assist in meeting responsibilities under the European Maritime Fisheries Fund (EMFF), including the conservation, management and rebuilding of fish stocks and the long-term sustainable harvesting of marine biological resources. The vessel will not only be arranged and equipped for both fishery and oceanographic research operations and other environmental research missions, but will also be fitted for other tasks, including maintaining and deploying Ireland’s marine data buoy network for Met Eireann’s daily weather forecasts.

Ireland has one of the largest offshore areas in Europe, and the newbuild will be engineered to endure the harsh conditions and punishing weather encountered in the North East Atlantic region, with an endurance of 21 days. She will embody the ST-366 design and will be acoustically silent, to ensure unfettered collection of high quality acoustic data and to meet the stringent ICES 209 standard governing underwater noise radiation. The specification provides for remotely operated vehicle (ROV) and autonomous underwater vehicle (AUV) operations, to enable ocean exploration to a depth of 3,000 metres.

Homeported at Galway, the vessel will be used be used by the Marine Institute, other state agencies and Third Level Institutes to undertake fisheries, plankton, oceanographic and environmental research and surveys, and also student training. Collaborative work will include continued transatlantic surveys with international partners through the Atlantic Ocean Research Alliance (AORA), and research endeavours funded under the EU’s Horizon 2020 programme.

Shipbuilding contractor Armon comprises shipyards and production facilities at a number of locations in north and northwest Spain, including Vigo, Gijon, Burela, and the Navia headquarters in the principality of Asturias. The company maintains a diversified output and has a reputation for bespoke, quality tonnage. Its track record in the research vessel category was augmented last year by the handover of the 70-metre Svea to the Sveriges Landbruks Universitet (SLU) of Sweden.

At the time of service entry 17 years ago, the Damen-built, 2,425gt Celtic Explorer was claimed to be first vessel worldwide to comply with ICE 209 criteria in the required sound frequency range between 10Hz and 63kHz.