Britain’s largest cruise ship and the first to be LNG-fuelled has been handed over by German contractor Meyer Werft, writes David Tinsley. 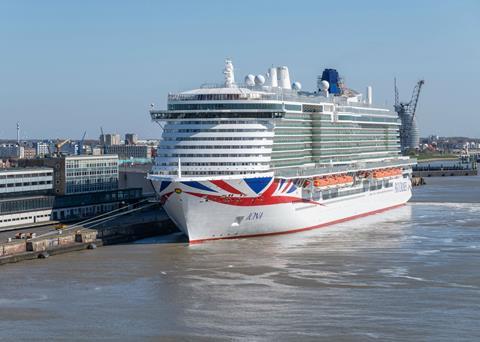 German-built for the British market, Iona will take up duty next year (credit: Meyer Werft).

The 184,700gt Iona has been put through her paces by way of an extensive trials programme in the North Sea, but will not make her service debut before the spring while the global pandemic persists.

Two such newbuilds were booked for Carnival Corporation’s UK-focused brand P&O Cruises, with Iona’s sister now expected to begin cruising at the end of 2022. Covid-19 has hit production schedules in both cases, as well as causing postponement of the operational start for the US$950 million Iona, originally planned to take place during the summer of 2020.

The 344m P&O ships are based on a design platform specified for nine newbuilds ordered to date by Carnival from Meyer Werft and Finnish subsidiary Meyer Turku and allocated and customised to various European and US brands.

The series began with the AIDAnova, delivered to Rostock-based AIDA Cruises at the end of 2018, followed in December 2019 by Costa Crociere’s Costa Smeralda. Iona is the third ship in the programme. The fourth vessel, Mardi Gras, is due to begin revenue-earning in February 2021 under the Carnival Cruise Line banner. Besides the second P&O ship, a further four newbuilds are on the books for AIDA, Costa and Carnival.

The design platform is distinguished by LNG dual-fuel electric power and propulsion, while the construction process features the fabrication and pre-outfitting of the entire engine room section as a floating module by Meyer’s Neptun Werft in Rostock. The 140m floating engine room unit (FERU), incorporating propulsion machinery, auxiliary systems and LNG tanks, for each newbuild is then towed to the assembly yard in either Papenburg and Turku.

The latest ship’s gross tonnage and passenger capacity are about 30% and 40% greater, respectively, than those of the previous addition to the fleet, the five year-old, Fincantieri-built Britannia, underscoring the erstwhile pace in volume demand growth and the unerring bid for new economies of scale.

Caterpillar’s MaK marque of medium-speed engine, designed and produced in Germany, has been adopted throughout the series. The four main gensets in Iona are each driven by 16-cylinder vee-form models of the M46DF dual-fuel engine, capable of 100% operation on LNG while providing the flexibility for immediate switchover to MDO or HFO.

The installation engenders a primary power concentration of 61,760kW, and feeds energy to the electric motors integral to the two 18.5MW Azipod azimuthing propulsors as well as to all other shipboard consumers, covering the considerable, sustained hotel load and the intermittent load impositions of the manoeuvring devices. The arrangements ensure a service speed of 17 knots and provide the requisite in-port power, while virtually eliminating sulphur and soot emissions when running in gas mode.

The first LNG bunkering operation was conducted at Bremerhaven in June and was effected by ship-to-ship (STS) transfer using the purpose-built bunker/supply tanker Kairos. To meet the specific training requirements for engine room personnel running and maintaining LNG dual-fuel plant, recourse was made to the parent group’s CSMART academy in the Netherlands.

The architectural highlight of the Iona is the SkyDome, a two-deck glass-domed roof designed by London-based structural engineering consultancy Eckersley O’Callaghan. Measuring 41m long, 29m wide and 4m high, the SkyDome is a pool environment by day that transforms into an entertainment venue by night, and allows uninterrupted views of the sky, sea and shoreline. The first structure of its kind, it is engineered to withstand the forces at sea, from deformations of the ship induced by wave loads to the vibrations created by the ship’s engines.

Iona will be homeported in Southampton for cruises to the Iberian peninsula, Canary Islands, north European city ports, and Norwegian fjords.