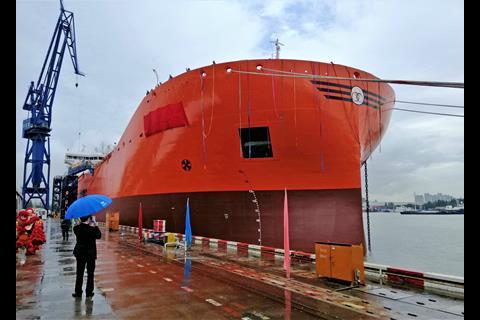 Bow Orion immediately prior to naming (courtesy of Odfjell). 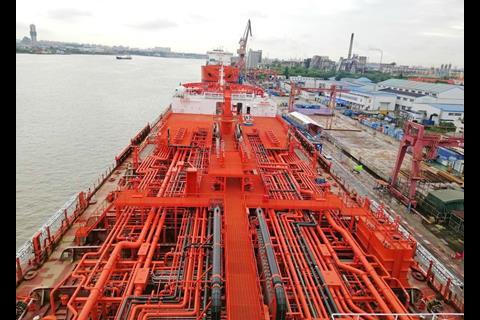 Ranking as the world’s largest fully stainless steel chemical tanker, the 49,000 dwt Bow Orion is being readied in China for delivery this month to Bergen-headquartered Odfjell, writes David Tinsley.

The vessel is categorised by the Norwegian owner and integrated service operator as a “super segregator”, by virtue of a cargo handling system and configuration which provides for separate products, grades and consignments in all 33 cargo tanks, affording a cargo volume of 54,000m3.

Four ships of the class have been contracted from Hudong-Zhonghua Shipbuilding. Bow Orion is scheduled to be followed by the second, third and fourth units (Bow Olympus, Bow Odyssey and Bow Optima) at approximately three-month intervals.

When signed off in November 2016, the US$240m newbuild project had denoted Odfjell’s first reinvestment in its core chemtanker fleet for 10 years. Hudong-Zhonghua, which has a relatively recent track record in the sector, is regarded as having one of the very few construction facilities in China able to meet Odfjell’s quality standards for such advanced parcel tankers. The number of yards worldwide with the actual capability to deliver all-stainless tonnage remains minimal, despite some claims to the contrary.

At any given time, Odfjell has about 80 chemtankers at its disposal. These ships collectively provide scope for some 600 different chemicals and liquids. The new generation spans the entire cargo range, introducing a new level of capacity, efficiency and environmental performance with the requisite safety and trading versatility.

The series is said by the owner to offer the “best-in-class emissions per ton carried”, keyinfluences being the refined hull form and the nomination of Tier III-compatible, two-stroke propulsion machinery. In each case, a six-cylinder MAN engine of the G50ME-C9.5 type has been nominated, with exhaust gas bypass (EGB) tuning and incorporating integrated Tier III technology in the guise of high pressure selective catalytic reduction (SCR).

The vessels will consume 14% less fuel compared to older “super-segregators” in the Odfjell fleet, while offering 35% more cargo space than the company’s 40,000 m3 series. Overall, unit costs will be reduced by 32%.

The cargo pump installation provides a 3,600 m3/h throughput capacity, both loading and discharge.

Prior to Bow Orion, the highest-capacity, fully-stainless tonnage deployed by the company has been the Polish-built S-class, delivered between 2004 and 2007 and providing just over 52,000 m3 of stainless steel containment.

Odfjell extended its commitments at Hudong-Zhonghua in 2017 by awarding the Chinese shipyard a US$116m contract for two 38,000 dwt parcel tankers embodying a 40-tank configuration and capacity of about 45,000 m3, due in 2020. The deal carried options on third and fourth vessels, and the design includes provision for switching to a dual-fuel propulsion solution. In addition, long-term charter arrangements were concluded with two Japanese owners on four newbuild stainless steel tankers, entailing two ships of 37,500 m3 and two of 39,200 m3, ordered from Japanese yards.

The motivation for its extensive capacity renewal programme is the age profile of the existing super-segregators engaged in core areas of the company’s business. Due to the restrictions set by many charterers, it can be increasingly difficult to trade effectively once a ship has turned 25 years old. New construction is deemed necessary, as such tonnage is not easily available on the secondhand or timecharter market.