A new partnership has been formed to advance China’s intelligent vessel standards and next-gen tug technology. 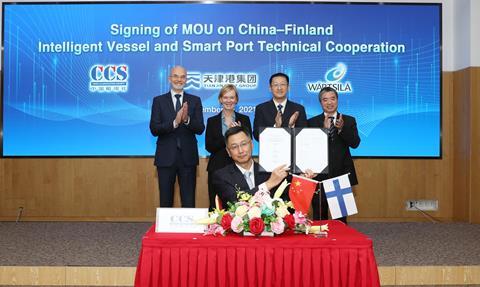 “Considering the Port of Tianjin is one of the top ten busiest ports in the world, as well as its strategic importance in China’s shipping scape, this is an excellent pilot case which opens many other opportunities for collaborations in the region,” said Sean Fernback, president, Wärtsilä Voyage and executive vice president, Wärtsilä.

The project’s larger aim is to research, develop and adopt intelligent vessel technologies that enhance safety and efficacy at busy ports in the region and to deploy next-generation tugboat technology at Tianjin, one of the busiest ports in the world.

But it also aims to develop intelligent ship standards for domestic vessels to drive adoption and scale-up deployment of smart technology.

The next-generation intelligent tugboat is expected to begin operation in the fourth quarter of 2023.

It will be equipped with an advanced situational awareness system to detect small objects in low visibility conditions and provide decision-making support to the crew.

The tug’s cutting edge technology will not be limited to port operations alone. It can be applied and extended to domestic vessels in the future. That, combined with new safety and quality standards, should help drive the adoption and scale-up deployment of smart technology in the non-seagoing segment as well — a key factor to enhance China’s shipping competitiveness.

Asia has nine out of ten busiest ports in the world and seven of those are in China.

Increasing traffic, congestion, the unpredictability of weather conditions and emissions have become major challenges for ports worldwide. During the pandemic, vessels in Asia had a waiting time of five to seven days. All this has acted as catalysts for ports to adopt innovative technologies that help mitigate delays and disruptions.