As the PFF conference began its second day, the focus of the conference shifted slightly from the immediate near-term to the short-term to medium-term outlook for the industry. 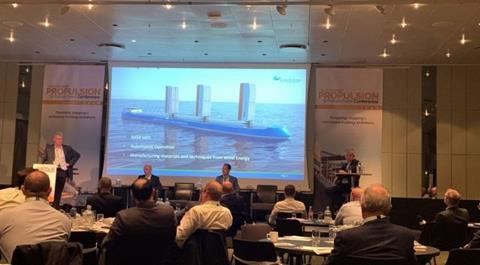 Having focused on the likely impact of changes in the regulatory environment for existing tonnage in the first day’s session, accompanied by sessions focusing on potential retrofit and conversion solutions, such as Rob van Solingen’s description of Wabtec’s elegant upgrade solution for the Amadea’s gensets, the second day focused on technical and safety issues connected with the introduction of alternative fuel solutions for the market.

The second day opened with a magisterial overview of the current and upcoming decarbonisation landscape from Charlotte Røjgaard, becomes Global Head of Bureau Veritas’ Marine Fuel Services. Before identifying the pros and cons of each of the potential alternative solutions, the industry had successfully weathered the IMO 2020 transition, and Røjgaard identified “ambition towards [meeting] these new targets, and… a can do attitude” within the industry. The economics and technical characteristics of different fuels would vary, while aftertreatment solutions would be a key focus, Røjgaard said, citing biofuel’s NOx emissions profile, US$2,000/t cost and lower energy content as challenges to the fuel’s wider adoption, before considering bunkering and upstream supply issues. Røjgaard also reminded the audience that as many new fuels have lower energy that cost comparisons should be made on an IFO380 equivalent ratio basis rather a simple per tonnes basis. “Pre COVID, LNG was a good choice. It was cheaper for energy content compared to the high sulphur fuel. But today, it’s almost three times more expensive.”

Røjgaard was succeeded by Hartmut Schneider of Woodward, who outlined the potential role that green Power-to-X fuels could play in the maritime transition. Looking beyond LNG, Schneider expects ammonia to be used slightly more than methanol for deep-sea shipping “because it might be cheaper in the production than methanol”. Schneider’s presentation about the different challenges facing engine designers developing solutions for alternative fuels, with a specific focus on the relative advantages of high and medium pressure fuel injector system for use with different alternative fuels was compelling. Schneider’s focus on the energy requirements for compressing alternative fuels, giving the example of gaseous or liquified hydrogen to the 600-700 bar required by a high-pressure dual-fuel engine, was particularly topical.

Frank Harteveld of Wärtsilä noted that engine test results from Wärtsilä’s ammonia combustion research programme had revealed CO2 equivalent savings of up to 60% for the first vessel tests of its gaseous ammonia Otto cycle approach. The tests had also revealed that higher proportions of ammonia than expected could be introduced into the LNG-ammonia fuel at higher engine loads (above 50%). Wärtsilä had also begun running liquid Diesel cycle route tests earlier in the summer. Harteveld added that Wärtsilä’s multi-fuel engine development plans included the planned introduction of retrofit kit solutions for existing dual-fuel engines “after we have learned more about the engines of our current portfolio”.

The introductory session was followed by a Q&A session with Ngoc-Lan Lang, a policy officer within DG CLIMA at the European Commission, handling the extension of the EU’s ETS system to the maritime sector. The interview saw Lang respond to detailed questions about the scheme’s design and reveal that it would permit ship owners to contractually assign the responsibility for ETS submissions to ship operators. A review of the scheme, scheduled for 2027, would permit appraisal of developments at the IMO level, and would also follow the end of a tapered introductory discount.

The conference subsequently divided into two separate streams, forcing delegates to choose between high-level discussions of developments in the LNG and methanol markets.

Frank Harteveld of Wärtsilä returned to discuss the LNG market and discussed the potential advantages (including an extension of operational life beyond 25 years) that LNG retrofits might offer for owners of mid-life vessels, as an alternative to speed limitation and early demolition. Recognising the challenging choices confronting owners, Harteveld noted that bio-methane was likely to improve the greenhouse gas footprint of LNG-fuelled engines as it enters the market in greater volumes towards the end of the decade. Wärtsilä expected to further lower methane emissions by improvements to cylinder geometries, he added during the Q&A.

During the concurrent methanol session, Berit Hinnemann of A.P. Moller Maersk introduced the company’s recent 16,000 teu container vessels, which will be capable of operating on methanol. The vessels would each consumer up to 45,000 tons of green methanol per year, and would collectively reduce Maersk’s CO2 footprint by 1 million tons, or by around 3% of the company’s emissions from its fleet.

Lars Skytte Jorgensen of Alfa Laval told the audience that the company was introducing two new solutions that were aimed at the methanol-fuelled market, including a power from waste energy ORC-based solution, as well as a new fuel cell-based solution that the company plans to begin testing late this year. Jorgenson also told the meeting that testing on ammonia, both as a fuel for fuel cells, but also as a combustion fuel would begin in 2022.

Olivier Cartier of Bureau Veritas concluded the methanol session by outlining the main classification and regulatory requirements for methanol. Cartier noted that one of the areas attracting attention was fire safety rules, given the need to adjust fire detection systems to handle the clean burning and light blue flame of methanol, as well as its ignition characteristics. Cartier also added that Bureau Veritas was currently developing a methanol-ready notation for newbuilds.

The first session after lunch saw delegates confronted with the choice between an ammonia session and a hydrogen focused session.

Peter Kirkeby of MAN Energy Solutions provided a detailed overview of the ammonia engine development project in the opening presentation of the ammonia session. He directly addressed a number of high-profile challenges to the development of the solution, including how to prevent N2O (laughing gas) formation, which MAN expected to address through an on-engine solution, through combustion tuning, and ensuring decomposition before releasing the exhaust valve. Kirkeby also noted that the initial versions of the engine were likely to use a pilot fuel ignition concept, at around 5%, although subsequent developments may seek to alter the fuel type. Kirkeby also introduced the solution for eliminating ammonia discharges via the venting system.

Rene Sejer Laursen of ABS noted that the development of ammonia-fuelled boilers and gensets were likely to be necessary on ammonia-fuelled vessels in the future, and identified a number of four-stroke manufacturers who were working to bring ammonia-fuelled engines to market by 2026, including HiMSEN (by 2024), MAN ES and Wartsila.

Christian Berg of Yara described the company’s efforts to establish a green bunkering business, including the conversion of a 500,000 tonne/year plant at Heroya to green ammonia production by 2026. He added that the announcement by the new Norwegian government that the Norwegian offshore fleet should switch to operation on carbon neutral fuels as soon as practically possible was driving interest in ammonia from ship owners active on the Norwegian shelf.

Since hydrogen’s first inclusion on the agenda of PFF in 2019, there has been rapid progress in the development of the technology. Sami Kanerva of ABB explained that the production of larger sized MW units would require the development of hydrogen-proof enclosures with process air and ventilation channels as well as a common balance of plant system.

Alexander Feindt of MAN ES discussed the company’s plans to develop 4-stroke combustion engines capable of operating on hydrogen fuel. The first of the two concepts under development is a dual-fuel H2 engine, using port fuel injection, which will be able to operate on hydrogen at up to 25% combined with LNG or diesel, which could be introduced as soon as 2023. The second concept is a compression ignition engine that would be capable of operating on pure hydrogen, which could be introduced as soon as 2026.

The electrification panel featured discussions around the potential market opportunities for battery hybrid or electrification solutions in the market, as well as consideration of safety aspects. Sverre Eriksen of DNV noted that adequate ventilation of the ESS compartment had been identified as one learning from recent safety incidents, adding that experience had shown that the use of seawater rather than freshwater to fight battery room fires had led to unfavourable outcomes.

The session was completed by a fascinating presentation by Dominik Schneiter of WinGD, who explained how the engine designer intended to integrate energy storage systems into propulsion solutions around WinGD’s 2-stroke engines. The solutions offered particular benefits for container feeders, PCTCs and other vessels with regular port calls, as well as for reefers.

The session was chaired by Gavin Allwright, the secretary of the International Windship Association, who brought a mix of dynamism and regulatory and technical insight to the session, combined with a realistic perspective about the challenges that still need to be overcome. But amid varying forecasts about the potential for wind to penetrate the fleet – Nick Contopoulos of Anemoi struck a realistic note when he told the audience that Anemoi had identified up to 7,000 bulkers and 5,000 tankers accounted for 80% of their service available market – there was a consensus that the wind-assist sector was benefiting ‘from a following wind’.

When Allwright told the conference that the coming decade would be a decade of delivery for wind, he also noted that a number of barriers to adoption would need to be addressed. Some, such as charter party contractual requirements for expeditious delivery, will be familiar to readers following developments around just in time arrivals to mitigate port congestion issues.

Many of the others, such as the ability of suppliers to meet demand, and even perceptions about wind as an Old World technology, had been overcome in the past 18 months. While fuel costs remained a key variable, the expected introduction of the ETS scheme in the EU and a potential global carbon levy would make a difference to cost/benefit analyses.

ClassNK’s Motoki Sagakami outlined that at present ClassNK’s approvals process was focused on ensuring the safety of the product, as well as the installation aboard vessels. At present, ClassNK does not issue an approval for the performance of wind-assisted propulsion systems, as this is “out of scope, in principle”. This approach is likely to change as next generation vessels, which Gavin Allwright described as potentially receiving

Mikael Razola, who was presenting a wind-propelled concept, the AlfaWall OceanBird, noted that the interaction between the vessel’s machinery and auxiliary engines and the primary wind propulsion was “quite interesting” with Swedish understatement, along with the vessel’s manoeuvrability. The interface between renewable energy and engine management systems is an area that is attracting a lot of attention: Nick Contopoulos explicitly identified that as one of the areas being looked at under Anemoi’s 10-year licensing deal with Wartsila.

It is a measure of how rapidly commercial interest in wind-assisted technologies has developed that the decision to dedicate a session at the 2021 Motorship and Propulsion & Future Fuels (PFF) to wind-assisted propulsion attracted so little comment. In fact, the energy saving potential of wind was a constant theme throughout the conference – with extremely large potential fuel efficiencies being touted by some developers. The potential fuel efficiency savings – above the 20% average fuel savings that the company’s founder, Vincent Bernatets, offered on Monday – achieved at high latitudes on transPacific routes by Airseas’ system remained a source of heated debate by delegates at the conference.

Refinements of engine management systems and potentially of propulsion solutions was another area where the pervasive influence of wind could be seen. It was noteworthy that Dr. Elias Boletis of Wartsila clearly cited the stability advantages offered by the Gate Rudder solution for vessels with wind-assisted propulsion.

Lastly, we should recognise that the Motorship Editor’s Award was won by Graham Harvey of Windship Technology. The company’s solution offered solid aerofoil designs as well as an innovative exothermic carbon capture system.