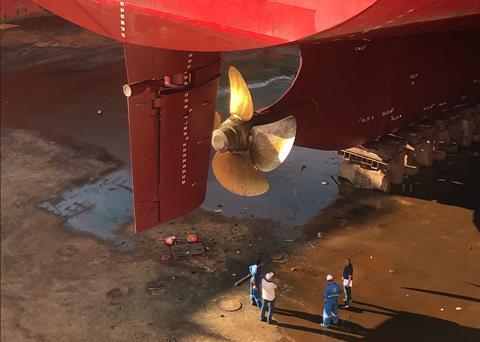 From here, Berg Propulsion’s advanced simulation tools were used to develop a new propeller geometry, which modelling showed would achieve markedly superior performance the new operation profile anticipated for the ship. In line with these findings, Berg Propulsion designed blades tailored for the operation, improving efficiency significantly, according to Sakandelidze.

“Efficiency gains are made for much of the time and, at 12 knots, the new blades achieve up to 50% higher efficiency than the ones they replace,” he said.

With performance improved at the speeds most commonly required during operations, Indian Express is expected to achieve an astonishing 22% fuel saving overall, as well as lower emissions. The reductions should exceed the requirements of the IMO’s Carbon Intensity Initiative (CII) goals for 2026.