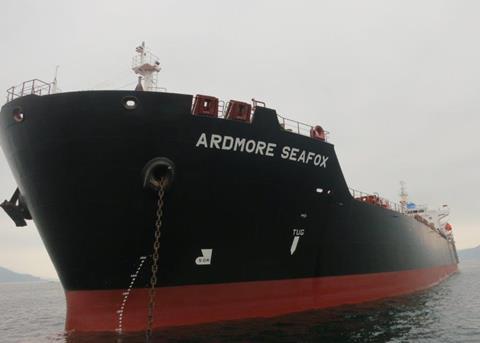 Along with a high-performance hull coating, these technologies are anticipated to reap fuel savings of 10 to 15%. Each ship also holds voluntary EEDI certification by ABS, with performance management technology provided by German company SeaSail.

Ardmore Seafox, which will be managed by Univan Ship Management, brings the company’s total tonnage to 819,519 dwt across 20 vessels. With an average age of under four and a half years, the Ardmore fleet is among the youngest in the industry.

Mark Cameron COO of Ardmore Shipping, said: “The addition of the Ardmore Seafox realises our continued commitment to incorporating high quality, modern and efficient vessels to our fleet. This is the second of four newbuild vessels to be delivered from SPP Shipbuilding this year and we look forward to continuing to work closely with SPP Shipbuilding on the remaining two vessels in the series due for delivery in the second half of this year.”