Hapag-Lloyd has completed the retrofitting of 23 of its container fleet with modern, electronically controlled water pumps, resulting in a big decrease in energy consumption. 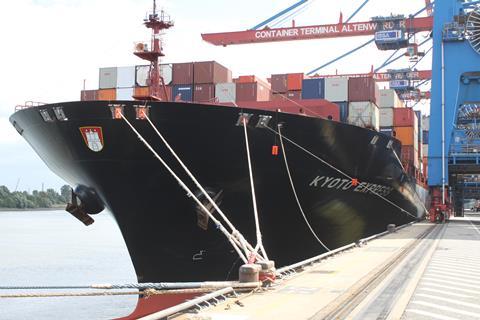 As shipping rates drop and competitive pressures increase, shipowners are under tremendous pressure to reduce the operating costs of their vessels. Although fuel prices are currently low, fuel is still the number-one place to save money. Furthermore, reduced steaming speeds have made many pumps oversized.

With these trends in mind, in 2014 Hapag-Lloyd began to gradually retrofit several 13,200 and 8,600 teu containerships with the CM-1000 system from Colfax Fluid Handling. As early as 2003 they began internal developments to control pump speed. But at that time, frequency converters were expensive and unreliable. For these reasons as well as the high utilisation of shipping capacity, Hapag-Lloyd pursued the project only once shipping rates plunged in the wake of the global economic crisis of 2008.

The availability of air-cooled frequency converters with a service life of 15 years or longer and lower steaming speeds (which made existing cooling water pumps oversized) were additional incentives. Joint development of the system with Allweiler, a member of the American company Colfax Fluid Handling Group, led to successive use in all of their container ships. In addition to the technical challenges, the shipping company required rapid service around the world, including spare parts deliveries and marine-capable components. In their experience, the latter requirement is not always a certainty, even with suppliers that deliver other marine products. For example, plug connections on cables must be much more vibration-resistant than those used on land. It is essential for cables used on ships to be shielded against alternating electromagnetic fields.

The CM-1000 uses frequency converters to intelligently control the capacity of cooling seawater pumps based on the temperature of the fresh water and the momentary need for cooling. The system improves the efficiency of on-board cooling seawater pumps and reduces operating and service costs, resulting in highly-efficient, environmentally-friendly, and sustainable operation of the cooling system. According to Lars Voss, senior superintendent at Hapag-Lloyd: "With this system we save up to 850MWh per year per ship. This fits in with our Ship Energy Management Plan, which allows us to operate our vessels in an environmentally friendly manner."
Hapag-Lloyd's container ships move goods between the Far East, Europe, and America. As the ships pass through different climates, the seawater that is used for cooling purposes varies in temperature by more than 30°K. In addition, slow steaming reduces the need for cooling. In this situation, the CM-1000 varies the speed of the seawater pumps in the cooling system so that only the exact required amount of cooling seawater is provided. If the ship is stopped or is steaming only very slowly, the ‘all-off’ function switches the pumps completely off. Particularly during winter demurrage periods in European ports, there is no need to pump seawater for cooling purposes.

The variable speed drive (VSD) of the CM-1000 system can reduce energy consumption during sea operations by up to 58%. If the additional Active Valve Control (AVC) function is used in the cooling water system, reductions of up to 85% are possible. In the experience of Hapag-Lloyd, energy savings of up to 96% are achievable during port operations. When the all-off function is used, savings of up to 100% are possible. If the cooling water system requires a minimum pressure, AVC will deliver that pressure even when speeds are low. But in Hapag-Lloyd's experience, this is only rarely necessary. AVC controls the valves in the seawater outlet line and automatically adjusts the system's characteristic curve so that the pumps are always running at the ideal operating point, preventing cavitation.

VSD drops energy consumption from 2 x 142kW to 2 x 40kW. AVC reduces it from 2 x 142kW to 1 x 35kW; during periods of low loads the reduction can be as low as 1 x 5kW. For Hapag-Lloyd this translates into potential savings of approximately 16 metric tons of fuel oil per ship per month.

The 8,600 teu Kyoto Express demonstrates how quickly electronic regulation alone can pay for itself just from lower fuel consumption. Since going into operation in the beginning of August, the savings were more than 455,000kWh for the two seawater pumps. Monetary savings were approximately €35,000 at August 2016 fuel prices. In less than nine months the CM-1000 was saving the shipowner money with every hour of operation. But there are other benefits: Thanks to the lower speeds, wear to the casing, impeller, bearing, and mechanical seals is significantly reduced. As a result, the need for overhauls has been extended from every 20 years to four times that amount, according to the chief engineer of the Kyoto Express.

After just two years, this improvement was evident on the mechanical seals. Until then, they required replacement every year, on average. Since the CM-1000 went into operation, no seals have required replacement. This allows the ship owner to reduce its stock of spare parts on board the vessel. Ultimately, this increases availability and improves safety on board. Less maintenance means less downtime. With the CM-1000, two of the four pumps are sufficient to meet all requirements, from maximum cooling to stoppage. The third and fourth pumps (previously held in reserve and used during demurrage) are no longer needed. Instead, they remain operational as redundant systems.

The controller can be installed when the ship is built or at any time thereafter. From Hapag-Lloyd's perspective, the Cabinet version of CM-1000 has proven particularly valuable for ships that never or only rarely stop at European ports. The manufacturer provides all of the electronics as a turnkey installation in switch cabinets, including the frequency converter and all cable connections. According to Mr. Voss, a climate controlled space on board the ship is the ideal solution. In his experience, a uniformly low ambient temperature is the most important condition for ensuring a long service life of the frequency converters. The Cabinet version can be brought into operation while the ship is underway and installation is usually concluded in four days.

Voss concludes: "All of the CM-1000 systems have been operating without any disturbances whatsoever since mid-2015. Our expectations are fulfilled. We now examine all new ships in advance to determine whether the CM-1000 will be suitable."