Brunvoll is just one of a very successful set of companies that haven’t succumbed to the pull of outsourcing to Asia, but despite the cost have kept the heart of their manufacturing at home in Norway. 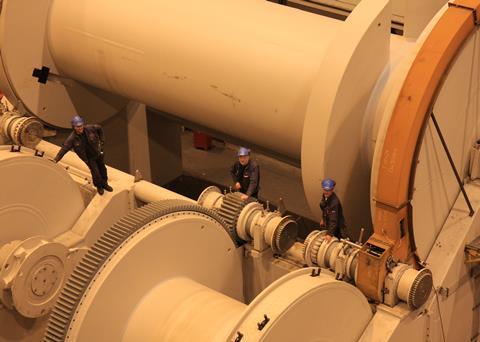 There are others, such as heavy winch and lifting gear manufacturer IP Huse, and it is worthwhile looking to see what these companies have in common.

Brunvoll’s major production line is in Molde, close to the heart of the Norwegian maritime cluster. Further, what Brunvoll does source from outside the company comes almost entirely from Western Europe – gears come largely from Scandinavia, for example.

Lars Myklebust explains that keeping to one location matters with something that takes as much intense, accurate work as manufacturing thrusters. “Its not that we didn’t look at China... but in this business you have to make a choice, you can’t both be here and there,” he says.

While in a very different part of the market, Inge Huse, the veteran behind the company IP Huse, voices a similar, related sentiment as he adds that its helps to know what it is exactly that your company is focusing on. “We are very clear,” he says, “if it’s heavy, and thick, and round, we do it. If its not, we pass it on to someone else.” This too has helped keep the business local – there’s not much point in paying a large amount of money to ship the parts around – they are big and just too heavy for it to be really viable.

It also helps that the maritime segment itself in this part of Norway is very dense. Its worth noting that Per Erik Dalen of the Norwegian Centre of Excellence (NCE) Maritime says that the area is important to keep Norway “ahead of the flock”. He points out that most of Norway’s strength in the marine operations field is concentrated within an hour’s drive from Ålesund and over 200 maritime companies along with training, research and finance institutions means “the group forms a very complete maritime cluster”, he says.

For IP Huse, its more prosaic: the fact that the company is located between the shipyards and the designers “means to an extent we piggyback onto the developments of our neighbours”, says Mr Huse. Certainly this density of knowledge in a small area has helped Brunvoll, as there is a natural flow of information and skills needed to run a very high tech business and keep abreast of shipside developments. Mr Myklebust points out: “It is not just the machinery itself, it is the interaction between people, people with a knowledge of technology, that creates competitiveness.”

Despite admitting that some of their customers show a certain amount of resistance to the sourcing of Chinese-manufactured components – as opposed to hulls - Mr Myklebust points out that Brunvoll actually has a healthy export market to the region, with around 30% of the company’s goods heading for Asia.

How, then, has the company managed to do this? Especially when the amount of money tied up in its 4,000m³ spares and stores area comes to something like €20 million.

The point is that it seems that the story of Norway’s expensiveness is a little incomplete without adding that the cost of borrowing money - in the past - has been rather low and there have been other incentives for exporting companies - which sadly are now under threat.

This has helped enormously when it comes to the very high-end machinery that Brunvoll has put in place to get ahead of the game. For example, Mr Myklebust says that a single, typical gearbox used to take 32 hours to machine manually. The first CNC machines halved this. Now, some years later its possible to get two standard units from the five-axes milling machine or one large, 7.5m diameter gearbox – which would be bolted together from two sections – in something like eight hours.

Further, Brunvoll has just invested in a large automated plant that will pick up 20 different parts, machine and place them – which means that the production schedules will now keep going throughout the night. Compared to previous units, the Mazak Integrex IG 800 gains Brunvoll an average time saving of 46%. And just to make sure the operators won’t be surprised by a hiccup on an overnight run, it can give out an automated text alert. All this means that there is room for development to meet the ever increasing demand for large capacity tunnel thrusters: Brunvoll’s new model, the FU115 has a maximum power of 3,500kW, coming from its 3.0m propeller diameter. In all, Brunvoll has invested about NOK200 million from 2007 to 2011 with another NOK20 million invested this year.

IP Huse, too, has invested heavily in high technology. To an extent, its something that goes with the territory – it’s simply very hard to pick up and manoeuvre components of 220 tonnes without the use of special handling equipment on the shop floor. The company specialises in the flame cutting of steel plates up to 300mm thickness and machining of components up to 100 tonnes. For example, the Hankook vertical lathe can machine gearing around 6.5m in diameter and 3.0m high.

Further Mr Huse points out that while wages may be lower in Asia a high-tech machining process costs around the same to set up in China as it does in Norway.

Despite the sums, the truth of the matter is that both companies are indelibly not just Norwegian, but tied up in the local area. They are both family businesses, with Brunvoll celebrating its centenary this year. Further, one industry source told me that Mr Huse rang around the local brass band one Christmas to see if there was anything they needed: the result was new uniforms for all.

Indeed, Brunvoll has actively pursued a Norwegian identity abroad. It still relies on a network of Norwegian representatives and vendors, further, about 40% of the turnover is goods and services from Norwegian suppliers. While it could be seen as a little xenophobic, it has to be admitted that it does seem to work.