The Motorship Propulsion & Future Fuels conference 2021: Regulatory Issues To Fore On Day One

The first day of The Motorship Propulsion and Future Fuels Conference 2021 brought together ship owners, ship operators and industry leaders to discuss the challenge of decarbonisation and strategies to meet existing and future IMO targets 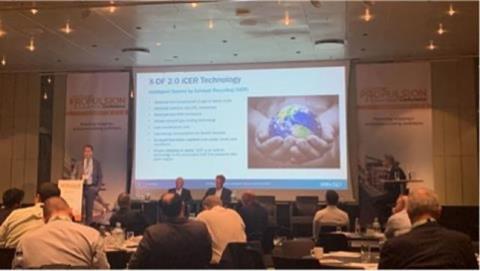 Dominik Schneiter of WinGD exclusively revealed that WinGD had reduced its methane slip below 1g/kWh - “a record low for any lean-burning engine” - during a recent test of concept trial of its iCER solution for multi-turbocharger applications.

The first day’s proceedings focused on the upcoming introduction of the IMO EEXI rules and CII rules followed by a series of presentations about recent retrofit projects, including examples of wind-assisted propulsion, engine conversions to operate on LPG as well as the continuing commercialisation of the Gate Rudder solution.

Dominik Schneiter of WinGD exclusively revealed that the company had achieved methane slip reductions to below 1g/kWh in a recent trial of its iCER solution for multiple turbochargers.

The centrepiece of the day was an extremely wide-ranging high-level ship owners’ discussion about the implications of the extension of the EU emissions trading scheme to cover shipping in a well-attended opening day at the Motorship Propulsion and Future Fuels Conference 2021 in Copenhagen, Denmark yesterday.

First day Chairman, Lars Robert Pedersen, Deputy Secretary General, BIMCO opened the conference and set the tone for the day’s discussions. While the COP26 conference was taking place in Glasgow, the birthplace of the steam engine, he closed the keynote with a stirring call to action. This is where we talk about action.

Christos Chryssakis of DNV noted that the very fact the conference was taking place hopefully represented a welcome return to normality. Turning to the political environment, he noted that nothing exemplified the increasing pressure on the industry better than the reception for the IMO’s decarbonisation targets. Lauded in 2018, they are now being criticised for not going far enough, Chryssakis noted. The regulatory landscape was becoming more complex, with the EU introducing regulations affecting shipping and other countries considering similar measures. Insurers and financial institutions were increasingly setting up schemes that would affect the industry. Forums such as the PFF conference offered a useful venue for participants to share experiences as the industry undergoes a period of change in the short term.

During an opening presentation, Graugaard outlined the challenge facing the sector, noting that if global trade volumes increased by 1.3% on a CAGR basis until 2050, global shipping’s emissions will increase by 20% by 2050 to reach 1.5 gigatonnes of CO2 equivalents.

Graugaard noted that reducing the emissions from global fleet to bring it within the target 2 degree Celsius rise would require significant investments. Drawing on modelling work produced by the Center, Graugaard told the conference that a levy of up to $230/t would be required to incentivise significant changes, although modelling suggested that the cost of the scheme could be mitigated by rebates to early adopters.

The panel turned its attention to the potential role of market-based measures, such as the extension of the EU’s Emissions Trading System (ETS) to cover emissions from vessels calling at European ports.

When Martin Kroeger said that “the industry is very open to discuss market-based measure mechanisms,” he summarised the consensus of the panel.

Wolfram Guntermann and Christopher Fee spoke for many ship owners in the room when they emphasised their preference for international regulation to be introduced at the IMO level.

The potential extra-territorial application of the ETS to voyages between the EU and third countries was also identified as a particularly sensitive area.

The particular ownership and operational structure of international shipping posed a number of challenges for a scheme that had originally been designed for application to fixed assets in the energy generation and heavy industry sector.

Christopher Fee and Bud Darr separately noted that the structure of the scheme needed to clarify where the responsibility for the emissions generated lay.

From the perspective of the bulker sector, Fee said he was a little concerned that the polluter pays principle is not being respected by the proposals, as it places the responsibility for paying the emissions to the ship owner. He added that ship owners’ ability to influence operational behaviour was limited during time charters.

The second session presented a number of presentations about the implications of the upcoming introduction of EEXI and CII.

Christos Chryssakis offer an uncompromising message about the applicability of efficiency measures, noting that the 11% increase in fuel efficiency that they would require meant that speed reduction measures alone would be insufficient after 2026. Chryssakis offered the example of the tanker market, with a significant proportion of the fleet at risk of falling into the lower D and E categories after 2026.

Mike Konstantinidis of METIS identified the opportunities that the use of digital solutions might play in reducing emissions, likening improved operational performance to an unexploited opportunity for the industry, while Chris Waddington of the ICS stressed that engine power limitation was likely to remain the simplest solution for shipowners in the short term.

The penultimate session of the day introduced a range of retrofit solutions. Dr Elias Boletis of Wartsila Propulsion described the continuing progress of the Gate Rudder solution, and noted that the solution was being looked at by vessels up to the size of VLCCs.

Vincent Bernatets of Airseas announced that the Nantes-based company has expected to complete its first commercial order in December. Rob van Solingen of Wabtec outlined the commercial advantages that its retrofit of MS Amadea’s engines offered.

Klaus Dahmcke Rasmussen, Head of Projects and PVU Sales at MAN PrimeServ, outlined the scale of the work involved in the conversion of BW Gemini to operate on a two-stroke LPG dual-fuel engine.

The project, which had been carried out with fuel gas supply system partner Wartsila Gas Supply and Chinese yard Yiu Lian, had demonstrated the importance of dedicating experienced project management and skilled engineering teams to the project.

The final session of the day provided delegates with a choice between three competing projects for The Motorship Editor’s Award, along with the BW Gemini conversion project.

Jan Thore Forss of UECC introduced the company’s A-Class LNG battery hybrid PCTCs - the first of their type - and told the audience that gas trials of the first delivery were due to start imminently, with delivery due in December.

Dominik Schneiter of WinGD presented the engine designer’s iCER exhaust recycling system, noting that the solution offered significant reductions in methane slip emissions. Schneiter exclusively revealed that WinGD had recently completed a test of concept trial of the extension of the iCER solution to multi-turbocharger applications upon a production engine in China.

The trial results demonstrated that the solution was compliant with IMO Tier II in diesel mode, offering a fuel consumption improvement of >8g/kWh, but the more significant results were achieved in gas mode, where the solution was able to run higher compression ratios, resulting in a GHG reduction of “over 8%” using this technology. Schneiter noted that this reduced the methane slip below 1g/kWh, “a record low for any lean-burning engine”.

Day two of the conference is in progress now and the discussions continue on ammonia, LNG, methanol, hydrogen and fuel cells, wind-assisted propulsion and electrification.