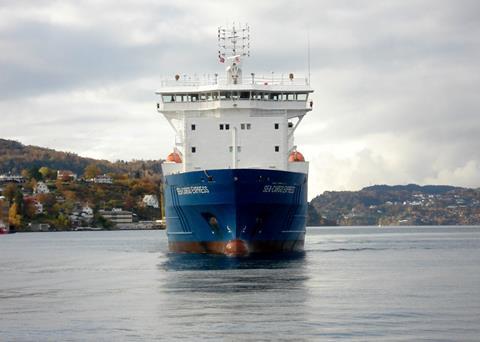 Introduced to liner-type service between Aberdeen and ports along the Norwegian coast, the 5,000dwt Sea-Cargo Express constitutes a refinement of the well-proven Norwegian design concept of multipurpose short-sea trader, incorporating ro-ro, lo-lo and sideloading modes.

The diversity and geographic spread of industry on the country’s long, fjord-indented fringe, typically modest shipment volumes, and the nature of the ports and terminals involved, demand vessels offering a very high degree of cargo handling versatility and manoeuvrability within a compact form. Often inclement North Sea and Norwegian Sea conditions, and the maintenance of multi-port itineraries, accentuate the need for scheduling dependability and a competitive, sustainable speed.

Sea-Cargo Express has been designed to offer the requisite combination of capabilities, and the fact that she is plainly cast in the Norwegian mould belies her Indian construction. Bharati Shipyard’s success in attracting the order in 2005 had been one manifestation of the Indian shipbuilding industry’s concerted drive on the export market at that time, and was all the more significant for the specialised and sophisticated vessel type entailed.

However, Bergen-based contractual owner Sea-Cargo has had a long wait for its ship, as a succession of delays has resulted in seven years elapsing between order signing and service entry. Nonetheless, Sea-Cargo has kept faith with the Indian yard in a follow-on newbuild project entailing two 5,900dwt LNG-fuelled ro-ros, which are now expected to be ready in 2013.

Although larger than the previous vessel, she can maintain the same intensive schedule, which can involve as many as 20 port calls in a single week, when this includes a lot of third-party berths on the Norwegian coast as well as regular liner service ports. The backbone of the itinerary to and from Aberdeen is made up of Tananger (near Stavanger), Haugesund, Bergen, Florø, Ålesund, Molde, Kristiansund and Trondheim. The importance of offshore oil and gas related business is implicit in the Aberdeen connection, although the Sea-Cargo operation is truly diverse in its mix of freight.

Typical of her breed, Sea-Cargo Express is configured with the accommodation block and bridge located forward at the break of the fo’c’sle. She displays her traits of self-sufficiency through a big stern ramp, side door/ramp, and heavy-duty deck crane. The funnel casing is offset on the port side aft, optimising weatherdeck cargo space. Based on criteria laid down by Sea-Cargo and Nor Lines, the design was developed by the Bergen technical consultancy Savicon.

The lower hold and tweendeck each have headroom of 2.4m and provide a total stowage area of 1,850m², with the tanktop strengthened for 10t/m² loadings and the tweendeck able to take 5t/m². Well suited to palletised cargo and to metal products deriving from Norwegian industry, the lower decks are reached by way of the TTS-supplied side door loading system, which also serves the main deck.

The cargo lift system, comprising two pallet elevator platforms, is accessed through the starboard side door/ramp, arranged in the midship section of the hull. With a 10t loading capability each, corresponding to the load rating of the lower hold, the platforms are at the top end of the capacity range for such equipment. The system provides considerable working flexibility as regards quay height, tidal and vessel draught conditions. When the ramp is deployed, the upper part of the door lifts and tilts, forming a rain shelter over the pallet elevators.

The main deck is accessed through a large TTS stern ramp, which accounts for 15m of the vessel’s near 18m width and is 12m long with 2m flaps. The ramp is rated for a maximum 100t load, and the scantlings of the ro-ro deck are such as to give a 6t/m² capacity throughout, enabling multifarious and denser freight to be carried, including oil industry equipment and forestry goods. This type of cargo intake is also facilitated by a clear height of 4.8m. The main deck garage is 1,320m² in area and affords a 500 lane-metre capacity, corresponding to an intake of 34 rolltrailers or mafi-type units of 13.6m.

Lo-lo freight is transported on the weatherdeck, suitable for project cargo and up to 118TEU containers, handled and stacked in two tiers by the portside-mounted, 50t knuckle crane, also supplied by TTS.

Another element which contributes to the design’s remarkable cargo handling versatility is the incorporation of a large hatchway in the weatherdeck just forward of the crane on the portside. This is closed by a flush-fitting, lift-away cover. Hatches have also been provided immediately below at main deck and tweendeck levels, such that cargo can be introduced to all underdeck spaces from the weatherdeck by means of the lo-lo mode. This facility is well suited to freight such as cassette-borne steel pipes and other consignments arising from producers and users in the hinterlands of the ship‘s current service connection between Scotland and Norway.

Whereas the SC Aberdeen is installed with twin MaK 2,000kW main engines, Sea-Cargo Express is powered by a single Wärtsilä 9L32 medium-speed diesel of 4,500kW, enabling her to make 15 knots. This is sufficient to fulfil the weekly sailing rotation, burning about 15t per day of intermediate fuel oil. Drive is through a Scana Volda reduction gear to a controllable pitch propeller made by the same company. The efficiency of the installation as a whole is raised by the adoption of a 1,125kVA Stamford shaft generator. The auxiliaries are three Volvo Penta D12 diesels of 370kW driving Stamford generators.

So as to enhance manoeuvrability in the confines of ports and at tight berths, Sea-Cargo Express is equipped with a 500kW bow thruster of the Rolls-Royce TT1300 type.

Sea-Cargo Express has provided the template for the owner’s two further, slightly larger newbuilds at Bharati which will be distinguished by the adoption of a gas reciprocating engine, and in a mechanical drive solution rather than in an electrical drive system. The 5,900dwt multipurpose ro-ro vessels will each be powered by a lean-burn Bergen B35:40V12 gas engine, turning the propeller through a reduction gear and also covering the electrical load by means of a generator driven off the gearbox. The ships are intended for service between the Norwegian west coast, the UK and near-Continent.

Compatriot and associate company Nor Lines is also investing in its shortsea fleet by way of two so-called Environship ro-ro/lo-lo multipurpose vessels of 5,000dwt. Ordered from Tsuji Heavy Industries’ Jiangsu yard in China, and expected in October 2013 and January 2014, these ships have also been specified with Bergen gas engines. Thus, both Sea-Cargo and Nor Lines are set to introduce tonnage that will not only keep the companies to the fore in offering flexible and efficient sea freight services in northern Europe and on the Norwegian coast, but will also minimise emissions per tonne-kilometre of cargo transported.