A NORDIC STAMP ON CHINESE PRODUCTION

Chinese construction married with advanced European design, engineering and propulsion technology has spawned what has been described as “one of the world’s most climate-smart  passengerships.”

The 63,800gt ro-pax ferry Viking Glory will bring new scale to the cross-Baltic traffic while promising a level of performance exceeding that of the earlier milestone vessel, the slightly smaller, eight year-old Viking Grace, hailed as one of the environmental pioneers of its time.

Following completion of her second and final set of sea trials at the beginning of November, handover by Xiamen Shipbuilding Industry to Mariehamn-based Viking Line is imminent, with a view to the vessel’s entry into service on the Turku/Aland Islands/Stockholm route during the early stages of 2022.

The 223m Viking Glory takes the dual-fuel-electric powering concept, meticulous attention to every sphere of energy usage, and championing of the passenger experience, as previously encapsulated in the Finnish-built Viking Grace, to a new level. After personnel, energy constitutes the second biggest operating cost for Viking Line, rendering further incremental gains in performance vital to long-term profitability and asset worth.

Beset by early delays in project execution and production, compounded by Covid-induced difficulties, realisation of Viking Line’s contract is about one year adrift. At the time of writing, the ferry was expected to arrive in Finnish waters by the end of 2021, to take up duty in the ensuing months as the replacement for the 1988-built Amorella on the Turku/Stockholm schedule, joining the 56,850gt Viking Grace. The service involves a call in Aland, ensuring that duty-free onboard sales can be offered by virtue of the islands’ autonomous status as a Finnish province.

Deltamarin developed the new vessel concept together with Viking Line and provided assistance to the owner during the tender and contract phases. Tailored to the shallow and sensitive waters embraced by the intended operating profile, special focus was placed on hull lines determination, as well as weight control, further advances in energy efficiency, including waste heat recovery, and improved general arrangement. Chinese-owned, Finnish-headquartered Deltamarin proceeded with the basic and detail design on behalf of Xiamen, and was also entrusted with project management and supervision.

The newbuild is some 5m longer and and 3m beamier than future running mate Viking Grace. Viking Glory has been built to 1A Super ice class and will accommodate 2,800 passengers and 200 crew, while the ro-ro freight intake corresponds to 1,500 lane-metres, raising cargo capacity on the Turku/Stockholm run by about 500 linear metres relative to the Amorella. The new ship’s passenger capacity represents an increase of 400 compared to the Amorella, and is on a par with that of Viking Grace.

Viking Line’s newbuild scheme had afforded one of the earliest contractual references for the dual-fuel version of the Wartsila 31 engine platform, and at some scale by virtue of an order entailing six engines each of 10-cylinder configuration.

The W31DF has more recently been uprated to 600kW per cylinder at 750rpm, but the available maximum power output when contracts were signed was 550kW/cylinder, such that the plant in Viking Glory will have a total potency of 33,000kW. The Azipod XO2100-type propulsors together account for some 22,400kW of the load, with the ‘power station’ plant also serving the constant, high hotel demand, plus the intermittent, surge requirements of the three Wartsila bow thrusters.

The Viking Grace had also been an outstanding reference for Wartsila, as the world’s first LNG-fuelled passenger-carrying vessel, specified with the Finnish marque’s wide-bore 50DF series. Four eight-cylinder models, providing a total power concentration of 30,600kW, are coupled to ABB AMG-type alternators. Energy is fed to a pair of ABB 10,500kW electric propulsion motors, turning stainless steel fixed pitch propellers. The entire plant came from Finnish factories, complementing the ship’s domestic production at Turku, then in the hands of STX Europe. 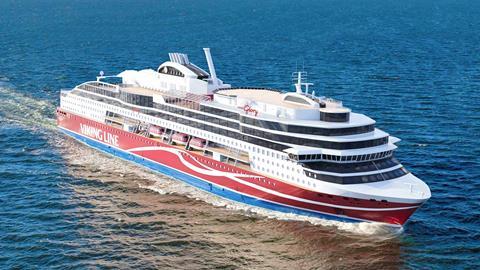 A new Baltic queen, Viking Glory is due in Finnish waters by the year’s end.

While Viking Grace has her LNG fuel storage on the aft deck, Viking Glory incorporates an underdeck fuel storage and supply system of the LNGPac type, also emanating from Wartsila. The new ferry has been specified with the LNG Cold Recovery concept, whereby ‘waste’ cold from the ultra-low temperature of the LNG fuel system (minus 163degC) can be recovered and recycled for freezer, cold storage room, and cold counter usage. All-in-all, it is calculated that the vessel will consume 10% less LNG per annum than Viking Grace.

The new ship’s service speed of 22 knots corresponds to that of the Viking Grace. The nature of the main machinery in both vessels offers the possibility of using biogas at some stage.

Simulations have indicated that the adoption of Azipods will lower resistance by some 8% against a traditional shaftline system. Furthermore, the increased manoeuvrability and responsiveness conferred by the 360-degree azimuthing units promises time savings in port which will allow transit speed to be marginally reduced, cutting energy usage without penalising schedules. The factor of manoeuvrability is a consideration of the first order for a ship of more than 200m navigating the dense Stockholm and Finnish archipelagos and the Aland channels. The electrically-driven Azipod system is also beneficial in reducing noise and vibration, an important factor in ensuring onboard comfort.

The ship’s preparation for future equipping with two 24m Flettner Rotor Sails from the Finnish company Norsepower plays to the project’s central technical edict of energy conservation. The sail-assist technology has been tested by Viking Line on Viking Grace over a three-year period.

Viking Glory hosts the latest development in Climeon’s energy recycling system, which harnesses waste heat from the engine exhaust gases, cooling water and excess steam to generate electricity for passenger facilities. Moreover, the ship is fitted with dynamic air conditioning and lighting systems, whereby certain passenger spaces are equipped with sensors that automatically switch off circuits when rooms are unoccupied.

The region’s client market has come to expect a certain onboard ambience and quality whether travelling for leisure or business purposes, and the stylish interior design and furnishings in the new vessel are of a calibre and character that reflect the essence of Scandinavia and the Baltic. Finnish operators gave birth to the original concept of the ‘cruise ferry’, which has filtered down through the industry in Europe and beyond to raise ship standards and service levels over the decades.

Turku firm ALMACO secured the order to build 1,121 passenger and crew cabins, plus the galleys, bars, pantries and provision stores, including cold rooms and freezers. The outfit features the latest iteration of the company’s Galley Energy Management system (GEM 2.0), yielding up to 20% energy saving against the debut GEM installation in Viking Grace.

From day one, Viking Glory will dock in Turku using a new, automated mooring system encapsulating vacuum technology. Auto-mooring will speed the process of making fast alongside, saving fuel as well as time, and improving safety in the berthing operations. The system is an element of the Finnish-Swedish NextGen Link project, coordinated by the port of Turku with EU financial support.

The price competitiveness of the Chinese product is amply borne out by the fact that Xiamen secured the contract in 2017 at EUR 190m, while the Viking Grace, completed in Finland by the erstwhile STX Europe at the start of 2013, had commanded EUR 240m.

While the latter reflected a premium inevitably entailed with an innovative, first-of-a-kind design, which provides wider benefit for the industry in creating a template for subsequent vessels and the requisite production procedures, the keen pricing level attached some years later to a second, yet more sophisticated vessel is indicative of the scale of Chinese ambition and confidence.