The shuttle tankers have been purpose built for operation in the Brazilian Basin under a long-term charter to Brazil Shipping I Limited, a wholly-owned indirect subsidiary of Shell. Eagle Campos is the first of three Suezmax shuttle tankers contracted under the terms of the long-term charter agreement signed between AET and Shell in December 2019. The remaining two vessels in the series are due to be delivered later in 2022.

AET noted that the vessel was delivered on 5 January 2022 and will commence operations in Brazil joining Eagle Pilar, which AET already operates there for Shell. The delivery is the first DPST to be built for AET at HHI, rather than the operator’s traditional supplier Samsung Heavy Industries, The Motorship notes.

The three 153,000 DWT vessels have been built to Shell’s technical requirements for DP2 shuttle tankers in collaboration with HHI, DNV and Eaglestar. The primary mover is constituted by a six-cylinder model of the MAN G70ME-C10 series driving a Wartsila controllable pitch propeller. The four gensets are based on HiMSEN medium-speed engines of the 320mm-bore 32/40 series, comprising four 7-cylinder in-line models and a single nine-cylinder in-line unit. The solution ensures full compliance with IMO NOx Tier 3 and SOx emission requirements.

Classed with DNV, the Eagle Campos is 278m in length overall and of 48m moulded breadth, with a design draught of 17.2m.

The vessel is equipped with electrical driven Variable Frequency Drive (VFD) cargo pumps and high power azimuth thrusters and tunnel thrusters and are fully capable of operating in weather conditions expected for their class. The eco-efficient vessel is also fitted with energy-saving devices such as the Hi Pre-Swirl Duct and Rudder Bulb for improved propulsion efficiency and is already EEDI Phase 2 compliant before the regulations come into effect. 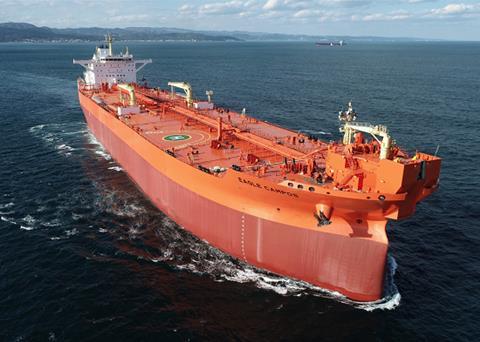 Eagle Campos was delivered to AET at Hyundai Heavy Industries on 5 January.

On taking delivery, AET Global Director Capt. Amit Pal noted “The delivery of Eagle Campos is another milestone in our growing partnership with Shell globally including in Brazil. Constructing, fulfilling the stringent tests and delivering Eagle Campos safely during an ongoing pandemic is a huge achievement and evidence to the persevered dedication of all parties involved. My sincere thanks to everyone from Shell, Hyundai Heavy Industries, DNV, Eaglestar and AET for this remarkable collaboration and safe execution. This accomplishment showcases the unity across the industry to deliver innovative solutions which contribute to a brighter future and create a sustainable global trade network.