An enduring joint venture between China and Poland has commissioned a multi-purpose, heavy-lift vessel of record size.

The 61,700dwt Tai Xing is the first of four newbuilds with a 300t lift-capacity ordered by Chipolbrok from Chengxi Shipyard at Jiangyin. 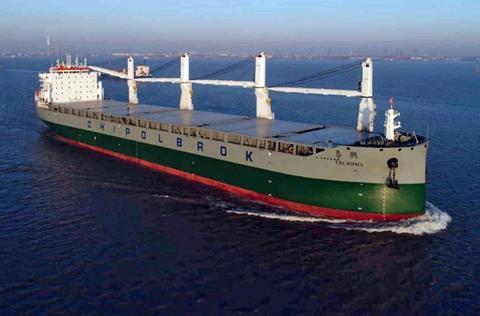 Although class assignment and formal delivery took place on 6 December, the Chinese yard brought the project to the sea trials stage in July, only 14 months after contract signing. Second in the series, Herbert, is fitting out, and is due to be followed into service during 2022 by third and four vessels Pilecki and Yong Xing, respectively.

Drawing on Chipolbrok’s 70 years’ trading experience, the new generation was developed by Shanghai Merchant Ship Design & Research Institute (SDARI), and provides a characteristically versatile platform for heavy and outsized shipments, bulk commodities, breakbulk and unitised cargoes, but on a deadweight far exceeding that of the company’s other ships.

Tai Xing’s underdeck volume in five holds amounts to 75,000m3, complemented by 5,000m2 for deck cargo, with the flexibility for full container loads of 1,994TEU, stowing 804TEU below deck and 1,190TEU on the weatherdeck hatch covers. By virtue of removable panels in the holds, the ship can function as either a tweendecker or singledecker, or potentially in mixed mode.

Self-sufficiency and muscle in cargo handling is imbued by four heavy-duty cranes mounted on high stools along the port side. Each of the two midway cranes has a load rating of 150t, and can be worked in tandem for 300t lifts. The fore and aft units are each of 80t capacity.

Constructed to dual Polish Register of Shipping (PRS) /DNV class, the new generation employs MAN Energy Solutions main and auxiliary machinery. A five-cylinder model of the G50ME-C design provides the propulsive power, at a stipulated output of 8,000kW, while the three gensets are driven by 6L23/30H four-stroke diesels.

Tai Xing is beginning her career by taking on a cargo of wind turbine components from China to Ecuador.

Chipolbrok was founded in 1951 as a joint stock company held in equal shares by the Chinese and Polish governments, with principal offices in Shanghai and Gdynia, and provides a liner-type service framework linking the American, European, and south and east Asian markets.

Regular fleet reinvestment over the years has focused on ‘polyvalent’ cargo ships incorporating the means of carrying heavy and outsized freight. By the end of next year, the core fleet will comprise 10 Orkan-type vessels of 640t lift capacity, four Pacific-class ships of 700t lift completed by Shanghai Shipyard in 2016, and chartered Trader-type multi-purpose units plus the Tai Xing quartet.