Construction of a new generation of short-sea cargo vessel has been awarded to a German shipyard purchased four years ago by Norway’s Fosen Group.

The 3,600dwt Dutch-developed type has been conceived to allow direct trade to and from berths on inland European waterways, and is distinguished by diesel-electric propulsion, an auxiliary sail-assist system, and provision for alternative fuels.

A series of six newbuilds of the 88m singledecker class will be built by Fosen Yard Emden, the erstwhile Nordseewerke, to the account of undisclosed German interests. First steel is to be cut during the spring, with the intention of bringing the entire sextet into service over the course of 2023. 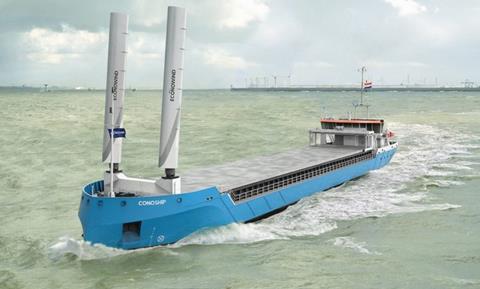 Conoship has aimed to set a new standard for low air-draught, river-sea coasters.

Devised by the Groningen firm Conoship International to set a new standard in the sea-river coaster category, the CIP3600 design constitutes a bid for economic advantage in the traditionally low-margin, intra-European bulk commodity traffic. This has determined the use of the diesel-electric mode and large-diameter propeller, in combination with the proven aftship form known as the ConoDuctTail, optimised hull lines, and wind-assisted propulsion device.

The single, box-like hold extends for nearly 61m of the ship’s approximate 84m length between perpendiculars, and for 10.8m of the 13.2m breadth, giving an underdeck volume of 180,105ft3. Flush hatch covers on high coamings will be handled by a travelling gantry, as long practised by vessels and designs of Dutch origin. The low air draught, abetted by folding-type sails, will ensure passage under bridge crossings on important trade arteries such as the River Rhine.

The power plant will be based on three diesel-generator aggregates of 990ekW apiece, feeding a pair of 375kW electric propulsion motors and a 250kW bow thruster, plus other shipboard consumers. The arrangements provide for a speed of 10 knots, adequate in the European short-sea bulk traffic.

The overall solution promises reduced environmental impact as a direct consequence of allowing engines to be run at their most efficient load points and at close power matching to actual energy needs, with the added benefit of being able to draw on wind power, reducing demand on the propulsion machinery. Moreover, Conoship’s technical team has provided for subsequent adaptation to permit the use of emerging, low-emission fuel options, such as liquid hydrogen or ammonia. The EEDI of the vessel type as calculated on the basis of diesel-based power is already below the phase 3 requirements.

Conoship’s imprint on the project has been all-encompassing. Besides the proprietary ConoDuctTail, used to effect on many north European short-sea traders, each of the new German-built ships will mount two Econowind VentiFoils on the fo’c’sle, promising fuel and CO2 savings up to 10%, depending on voyage route. Central to the Dutch company’s philosophy with the CIP3600 design has been adherence to production-friendly construction principles and orientation to series output, so as to promote competitive building at a variety of shipyards in north west Europe.

Moreover, the project leading to the contract at Emden was initiated by Conoship itself, based on extensive market research. It undertook proactive marketing of the new diesel-electric coaster type, sought out clients and sourced possible builders, and ultimately acted as broker between finance houses, operator and shipyard.

For Fosen Yard Emden, the assignment is seen as the start of a new era, endorsing efforts made since 2019 to restore shipbuilding activities. The shipyard’s managing director Carsten Stellamanns said “The order is intended to become a flagship project and attract other, similar projects to the region.”

During 2018, Fosen Yard of western Norway acquired a majority holding in Nordseewerke Emden Shipyard, and renamed the business Fosen Nordseewerke. The following year, as Fosen Yard Emden, the enterprise became a full member of the Fosen Yard Group.