Much needed investment in the ferry line between the island of Sakhalin and the Russian mainland is taking form with the imminent completion of the first of two versatile newbuilds.

As a Russian Far East project, construction was assigned to Amurskij Shipbuilding Yard, located at Komsomolsk-on-Amur. Final outfitting is carried out around the coast at the builder’s Vladivostok premises, where second-of-class Vasily Oshchepkov arrived in September. As indicated by keel layings back in June 2017, realisation of the scheme is much delayed, with commissioning of the ships having originally been foreseen by 2020.

The new generation, ordered through the State Transport Leasing Company, will transform the service linking the mainland terminal at Vanino with the Sakhalin port of Kholmsk. The ferry route constitutes a vital part of the regional infrastructure, handling around 75% of the island’s freight traffic across the Strait of Tartary. The incoming vessels will replace outmoded, diesel-electric ferries operated by the Sakhalin Shipping Company, and provide the requisite mix of ro-ro rail and road traffic and passengers at higher capacity, and at markedly greater efficiency, flexibility and productivity.

Rail tracks embedded in the main deck provide for the various types of 12m, 13.9m and 14.7m railcars of the Russian 1.52m gauge, up to a maximum 32 rail wagons, with ro-ro freight accommodated at the same time in the lower hold. The design allows various loading permutations, including an entire road transport payload across the two cargo decks, amounting to 39 trucks and trailers. The 740 linear-metre all-up capacity for heavy goods vehicles and rolltrailer-borne freight is nearly twice that of the outgoing ferries.

Stern door access for rail and road ro-ro freight is complemented by a ramp on the starboard quarter for vehicles. Inter-deck transfers are effected by a 55t cargo lift, and there is additional space for 28 cars. Compared with the existing mainstays of the route, passenger capacity has been doubled to 200. 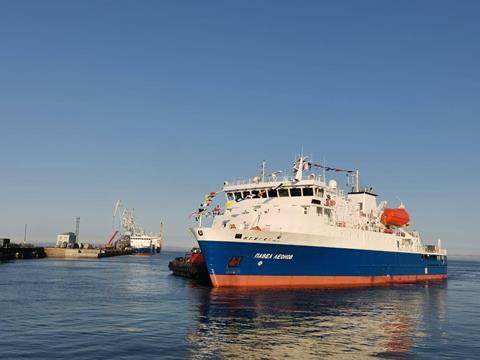 The new railships will bolster connections between Sakhalin and Vanino. Cross-strait connections with the Kuril Islands were boosted by the entry into service of newbuild passenger and cargo ferry Pavel Leonov and a sister vessel in late 2021.

While the array of notations assigned by the Russian Maritime Register (RS) includes categorisation to Arc5 ice class criteria, the bow and stern extremities have been structurally designed to the higher, Arc7 standard.

The primary power installation comprises four 4,000kW engines, driving twin controllable pitch propellers. The system confers a maximum open-water speed of 18 knots, and allows economical schedule-keeping at 12 knots. Ice-going capability at a laden, 6m draught is such as to enable the ship to make not less than three knots in level ice of 1m thickness, and for six to eight knots to be maintained where the ice covering is no more than 80cm.

The performance offered by the new generation promises reduced reliance on icebreaker support in the more severe ice conditions, as may be experienced, for instance, on that part of the passage within 30 miles of Vanino. Furthermore, the design’s manoeuvring characteristics facilitate mooring without tug assistance and running astern for some distance through the port channel at Kholmsk. The greater factor of independence means not only savings in costs, but also in quay-to-quay transit time.

The new breed of ferry has been developed by the Marine Engineering Bureau of Odessa, which made recourse for specific studies, calculations and tests to the Central Research Institute of the Marine Fleet, the Vympel Design Bureau, Krylov State Scientific Centre and Finland’s Aker Arctic Technology, as well as to JSC Russian Railways.