Norway-based VARD has delivered its largest vessel to date in the shape of the 205m, polar-going cruiseship Viking Octantis. Handed over just before Christmas at the group’s Soviknes yard near Aalesund, the diesel-electric newbuild has signalled Viking Cruises’ entry into the expedition-styled segment of the market.

The design is tailored to operation in Arctic and Antarctic waters and also for North America’s Great Lakes region, and provides high-end facilities and onboard comfort for a maximum 378 passengers. 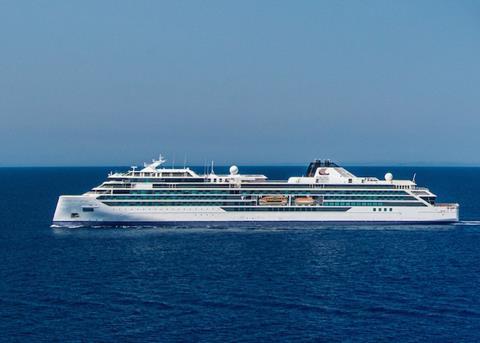 The project is distinct from the 16-ship, Viking Star-class programme running until 2027 at Fincantieri, VARD’s parent organisation. Revealing scant details of the planned vessels at the time, Viking awarded VARD a letter of intent for two ‘special’ cruise vessels in April 2018, subsequently entering into a firm contract in July 2018.

VARD assigned main hull construction in each case to its Tulcea yard in Romania, near where the Danube flows into the Black Sea, with final outfitting, completion and trials the remit of its Soviknes establishment. Several of VARD’s and Fincantieri’s subsidiaries have been heavily involved throughout the shipbuilding process for the Viking Octantis and the identical Viking Polaris. The latter was floated out at Tulcea last July, and is set to join the fleet in August 2022.

The hull features a slightly inverted, bulb-less bow, strengthening to Polar Class 6 standard, and fin stabilisers, plus a U-tank roll-damping system to reduce motions when stationary offshore or holding position in polar waters.

The shipowner claims that Viking Octantis takes energy efficiency in the expedition ship category to a new level, exceeding EEDI requirements by nearly 36%. The vessel also provides a reference for DNV’s SILENT-E notation, ensuring that underwater radiated noise is kept within the average-to-moderate spectrum, and providing documented noise performance for authorities, including those administering transits through vulnerable areas.

Interior design contractors were Rottet Studio of Los Angeles and the London firm SMC Design. An innovative feature is the adoption of what is known as a Nordic Balcony for each cabin, or stateroom. The balcony’s floor-to-ceiling, distortion-free glass allows guests to take in the view while keeping the elements out, with the added facility to create a sheltered, open-air space by lowering the top of the panoramic glass to elbow level.

Viking Octantis and Viking Polaris have been specified with substantial, dedicated laboratory space, intended to support scientists undertaking primary research, albeit with potential, supervised access by passengers. This aspect of the new vessels was developed in partnership with the University of Cambridge and Akvaplan-Niva, a daughter company of the Norwegian Institute for Water Research.

Viking Octantis sailed at the end of December from the Norwegian west coast to South America, to take on passengers and inaugurate the company’s Antarctic voyaging this month. After official naming in New York during April, the ship will conduct spring and summer cruises in the Great Lakes. Husbandry of Viking’s new asset, which is enrolled with the Norwegian International Register (NIS), has been entrusted to Wilhelmsen Ship Management.