Back to search results

Hydrex offers turnkey underwater repair solutions to shipowners wherever and whenever they are needed.

Recently Hydrex diver/technicians carried out scrubber overboard pipe repairs in ports in Belgium, France, Malta and Spain. On a 397-meter container ship two pipes were replaced while one pipe was replaced on an oil tanker. In all cases the pipes were protected with a corrosion resistant coating produced by Subsea Industries.

Exhaust scrubbers are systems that filter out all harmful toxins from exhaust gasses of marine diesel engines. These can severely corrode the pipes of the scrubber which can result in water ingress if not handled quickly enough.

In the examples below all pipes needed to be replaced completely. They were constructed at the Hydrex warehouse in Antwerp. Hydrex divers are certified wet and dry welders as well as technicians which allowed them to offer full repairs from start to finish to each of the customers.

The inside of the pipes were coated with Ecospeed to protect them against corrosion. This product is produced by Subsea Industries and is highly corrosion resistant. Taking into account the nature of the process taking place inside a scrubber, this is essential for a lasting protection of the pipe. The coating can also be used to protect a newly installed scrubber system.

A team traveled to the oil tanker’s location in Antwerp. After arriving at the ship they first performed an inspection of the damaged areas on both the waterside and the onboard side of the hull.

The diver/welders then sealed off the outlet of the overboard pipe. This was done with a custom cofferdam designed and constructed at the company’s workshop.

The stub piece of the scrubber pipe was then removed and replaced with a new one. It was positioned and secured with a full penetration weld. When the welding was complete the surface was cleaned and an MPI was carried out by an independent inspector.

Adapting to the customer’s schedule

The operation on the container ship was almost identical to the repair described above. However, the vessel was on a very tight schedule and it was essential that the ship could keep to this schedule during the repair. For this reason Hydrex split up the operation in several stages. These were carried out in different ports to fit the customer’s need: Barcelona, Fos-Sur-Mer and Malta.

The team first traveled to Spain. There they installed the cofferdam and loaded all the needed equipment onboard. The ship then sailed on to France where the diver/technicians replaced the two damaged scrubber pipes and unloaded the equipment. The final part of the operation took place in Malta. During this stop the cofferdam was removed and a final inspection was performed. 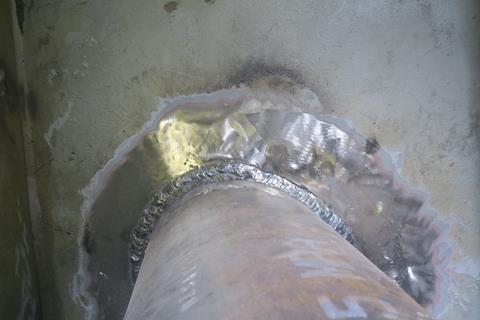 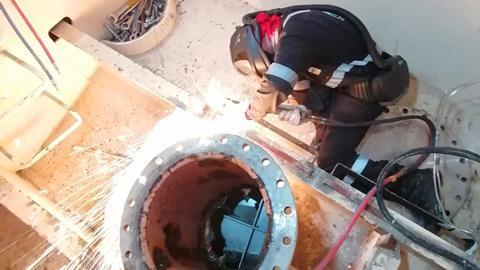 Hydrex diver/welder during installation of a new scrubber pipe.

Hydrex offers turnkey underwater repair solutions to shipowners wherever and whenever they are needed.

Back to search results